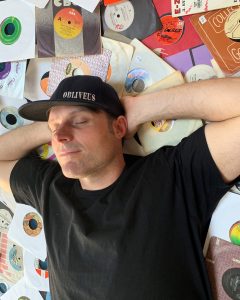 You have a large collection of 45s spanning many different genres. What would you say is your strangest 45 purchase and how did that come about.

did come away with Jim Nabor’s doing ‘The Impossible Dream’ from an op-shop once and anyone that knows me knows that that is exactly the type of track I would drop peak time just to mess with punters. So I guess that isn’t really strange. Ha!

Can you tell us about your mix for the show and the artists you have chosen to feature.

I decided to keep it simple and just drop a bunch of funk, boogie and disco that I recently played at my first “official” gig back since Covid-19 wrecked shop all over the world. The gig was at this sick joint in Melbourne called Section 8 and due to numbers and restrictions, they had us play on a veranda way above the crowd. As I’m afraid of heights, it was both surreal and frightening at the same time so I decided to go big as it’s not often you get to play an outdoor venue 25m off the ground (lol). So for this mix, I just grabbed the records I took out that night (2 nights ago) and I decided to keep it dancefloor friendly for all my mates still on lockdown (I feel your pain, trust me). Expect a bit of Ken Burke to get proceedings going, some classic Latryrx, Bill Withers, Bazuka, a couple Candi Staton (one of my all-time favourite artists), Peter Brown, Shalamar, General Caine, Numonics, Wham (a Mr Lob favourite), Change, Midnight Star, Vin-Zee, a couple of Dusty Donuts jams and a newish 45 from my man out of Sydney, Paris Groovescooter and his edit of Bumpa2Bumpa’s version of “All Night Long”. So many dope jams out there, it was hard to choose. Hell, I even threw in the Rocky theme song from Bill Conti.

You are based in Melbourne which has recently been released from lockdown (and is now currently back in lockdown). How did you spend lockdown creatively and what are you now most looking forward to doing again?

I worked through the entire lockdown (teaching from home to my students online), so I was quite busy with that. I was actually in hospital myself just before lockdown with pneumonia, so came out super weak to find everything completely changed around Melbourne. A week after that, I was approached by Bondi Radio (in Sydney) to do a lockdown 45’s show for them, which lasted about 3 weeks before I was approached by Base FM in New Zealand to do the same (for some reason stations came calling). Rather than do that one as strictly 45’s, my partner Shan Frenzie and I decided we’d approach all of our musical heroes and do a weekly show focussed on telling the stories behind the stories. Creatively, it’s been the steep learning curve because what the hell do I know about radio? But it’s been fun and during the very harsh lockdowns when only my wife or I were allowed out of the house for essential items and we were required to stay within a 5km radius zone around our house, it has kept me sane.
You have had some amazing guests on your Low End Theory radio show with Shan Frenzie including Andy Cooper, The Allergies and J-Felix. How have you gone about getting these great DJ’s and artists involved and has there been any particular highlights?
To be honest, we both just reach out and nobody seems to say no. Obviously, Shan has 25+ years experience doing radio so has a lot of contacts in the industry, so that helps. But in reality, we just email record labels and/or artisits, explain who we are and who we have already interviewed and give them our website/podcast (www.thelowendtheory.com.au). That’s about it. I think Covid has actually worked in our favour as so many of these artists are stuck at home like everyone else and they have time on their hands. Plus, I think they respect the fact that both Shan and I are nerds about this stuff and we do our research, so we’re not asking the “run of the mill” questions. We bring up the rumours, the bad times, the good times and we really try to “sell” the human element to these artists who we have respected for so many years and I think they appreciate that. We also package the interviews up into a very tight promotional tool for the artists (if they want it) and cover all aspects of their careers up to whatever new music they are releasing (if they are releasing new music).
Highlights have been numerous, but I reckon I’d have to go with our interview with DJ Ransom out of Melbourne. To hear someone who I have respected immensely for 20 years (since I moved to the country) ponder life post-Covid due to all of the potential changes around venues being shut down for some period of time or not re-opening at all was a real highpoint of our show in so many ways. I know Shan and I both received a lot of feedback from folks after that interview as it hit home on so many levels, especially for those whose main source of income is DJ’ing. It was real. Hell, I DJ regularly, too, and have taken a massive hit in 2020…but I have a normal job, as well. To hear his perspective really hit home for me. Similarly, Ras Kass was a highlight because he had this “street cred” vibe about him juxtaposed with a real sadness over where his life was at. There was regret, but he’s not feeling sorry for himself and his new music reflects an “anger”. After listening to his interview, you know exactly why he’s angry. The fact that his new album is banging, too, makes it all the more worthwhile. Choi from Cookin On 3 Burners and The Traffic was another one of my favourites, simply because I’ve respected what he has been doing for so long and didn’t fully understand just how much he has done for the Melbourne funk/soul scene. For that matter, Kylie Auldist was a great guest and she and I “singing” (well, she sung and I choked) Van Halen together was radio gold.

What tips do you have for anyone wanting to host their own radio show?

Just do it. Don’t worry about what anyone else is doing and don’t plan on making ANY money out of it. As long as you’re passionate, it’ll be the funnest thing you’ve ever done (outside of sex). Also, get a good mic (I’ve learned this the hard way) and try to find someone who’s been doing radio for 25+ years to do the show with you as they pretty much will teach you everything you need to know. But don’t take Shan…get your own Shan.