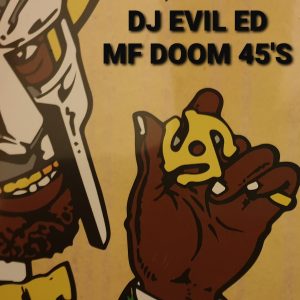 Congratulations on your amazing 45s tribute mix for MF Doom. Can you tell us about why you chose the tracks you used and how you went about putting the mix together?

Thanks! I just went through my 7″ collection and pulled out all the records by Doom or one’s he produced. I’ve accumulated a few over the years and used all of them and both sides of some. I also pulled out a few of the original breaks that I have on 7″ that matched those on the Doom tracks I used. Unfortunately there’s some killer samples that aren’t on 45’s and there is one on 45 I would like, but the only copy of it on discogs is going for around $2000. I would also have liked to put a couple more Doom 45’s on there, but again I can’t get hold of them now as the prices have gone crazy so I stuck to what I had in the collection. I had plenty of great tracks to use. The Greedy Fingers track is remastered and has just dropped on 7″ with the instrumental. I’m not even sure if it’s out officially yet, I got a copy direct from them. 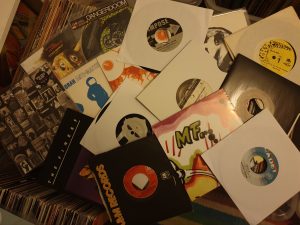 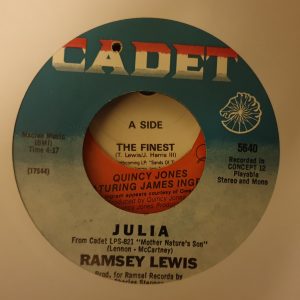 You first heard Doom in KMD. When was that, what track do you first remember him appearing on, and what did you make of him back then?

Like many of us who were listening to Hip Hop in the 80’s we first heard Doom on ‘The Gas Face’ by 3rd Bass. I was a big fan of that group and that was a very big track. It’s comparable to first hearing Nas or someone like that, obviously a dope and original MC who impressed us with a guest verse on a big record and then went on to become a Hip Hop household name. There was also a video for ‘The Gas Face’ so we saw him too. A few years later I bought the ‘Peach Fuzz’ 12″ by KMD and then I heard ‘Humrush’ on Westwood and that blew me away. I suppose that was the real pre-cursor to the MF Doom style using cartoon/TV soundbites and it was a novelty record in that respect, but somehow not corny, it was a proper Hip Hop track with a fun element, he and KMD had the balance right. Soon after hearing that I bought the ‘Mr Hood’ LP on import vinyl from a tiny record shop in Leighton Buzzard where I lived that used to stock only a small handfull of new imports. I got that and Pete Rock & CL’s ‘All Souled Out’ EP around the same time and was also driving around in my Fiat 131 blasting ‘Ace In The Hole’ from ‘Derelicts Of Dialect’ the second album by 3rd Bass. Great times for Hip Hip music. KMD were amazing.

What is it about Doom’s rhymes, flow productions that made him stand out?

I think he just came with something original and fresh lyrically, it was that raw, uncut rhyming, a great voice and raps. It was a real great alternative to the polished sounding rap music that was coming out at the time. Lyrically, there are some lines I only just picked up on when hearing them again doing this mix, like oh, that was clever. I guess just great delivery and flow, very listenable and not the same old same.
His production is deceptively simple, sometimes he will use very recognisable samples, but put his own stamp on them with the way he loops them or brings out the groove in them and boosts eveything in the right places (ie. makes them sound bold and present). The off kilter, live sounding drum sound/pad hits are a bit of a trademark, a nice touch that give it a very human feel. He just had that magic formula, simple at times, but very effective. One example is ‘Rhymes Like Dimes’. I put the original sample on the mix and you can hear how he flippes it. Genius. Him finding some of the more unknown loops he used too. That’s a real art in itself. He used some scorchers.

You used to collect the Stones Throw Fanclub 45s. Can you tell us about some of these 45s and in particular any by Doom?

I used to collect all the 7″ singles that Stones Throw Records released back in the late 90’s/early-mid 00’s. Some you could get in the UK, but I used to order the fan club 7″s from Sandbox Automatic in the USA along with independent Hip Hop 12″s that I couldn’t get over here. The one I put in the mix is ‘One Beer’ by Madvillain. I’ll send you a scan of the letter apologising for delay on the pressing. It was worth the wait, the other side of the 7″ is etched. A real nice 45. 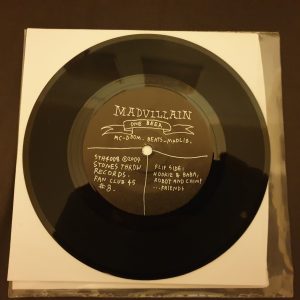 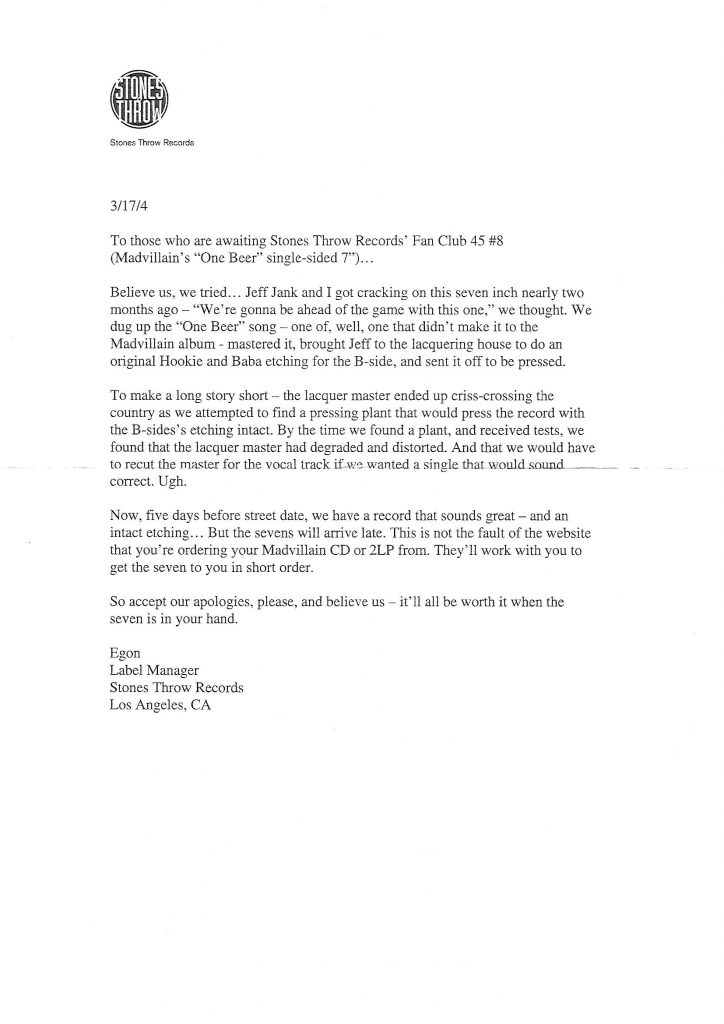 When was the last time you got to see Doom live, where was the gig and what do you most remember about it?

It was at Concorde 2 in Brighton and I think it was around 2011. It was actually the first and only time I saw him live and it was great to finally see him on stage after over 20 years of listening to his records. I remember there was speculation beforehand as to whether it would be him or an imposter in a mask and whether he would even show up, but he did and it was most definitely him. I thought his performance was great, just one MC with a mic and a DJ going through his classics new and old. I would like to have seen him with Madlib or Ghostface or another collaborator or a live band like BBNG, but it was great to have seen him just on his own spitting raw raps. Rest In Peace MF Doom. One of the greatest Hip Hop artists of all time.