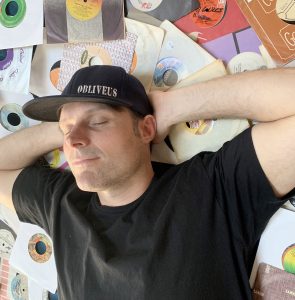 Your brilliant 45 Day mix is jump blues and soul. Can you tell us about some of the tracks you included?

Was really planning on making a bad 80’s mix, but as I clutched that Whitney Houston 45, I just felt it wasn’t appropriate for the occasion. I decided to open it up with one my good mate Mr Lob found for me recently, James Brown’s classic ‘Chonnie On Chon’, and from there felt a jump blues, big band and popcorn soul set was in order. Joe Turner’s ‘Shake, Rattle & Roll’ is one of my all-time favourite jams and still gets people dancing and off their arses today (especially when mixed with Kanye…trust me). Bobby Day, Little Walter, Daddy Cleanhead, Andrew Sisters, Jack McVea, 2 Ray Charles track (I love the man’s music) and a host of classic 45’s from the 40’s right up to the early 70’s; it’s all in here.

How and when did you fall in love with 45s?

I’d always collected 45’s for fun and occasionally would play one out (usually a bad 80’s 45) back in the early 2000’s, but it wasn’t until I listened to an interview with Boca 45 around 2006 when he was out here on tour that I decided to take the plunge and start doing sets with nothing but. Mind you, in 2006 playing a 45’s set for me was tough as I only had 1 adaptor and about 100 45’s (mainly bad 80’s pop), but I did have quite a few hiphop, reggae, funk and soul tracks that I’d purchased because I loved them. So I really couldn’t do it properly and would still resort to playing some 12’s and such in the first year. Got better with them and met Mr Lob a couple of years later and we would both play 45’s sets at this cool bar, Dirty Secrets and nobody seemed to care but us.

By 2009, I was booking and playing the only real nightclub/pub in the northern suburbs, The Penny Black. To keep it fresh (as I was loving Serato, too), I would play 6-hour sets of nothing but 45’s on Friday and Saturday nights to up to 1,000 punters. I’d genre hop because the owner didn’t want an RNB super club and that was quite easy to do at the time with Serato. So I’d go from Elvis Presley to NWA to Donna Summer to Aretha Franklin to Run DMC; I was buying a lot of 45’s by this time. I learned how to mix them fast to keep the dance floors packed and from there I just completely fell in love with playing them. Met Shan Frenzie soon after this and we bonded over these donuts; the rest is history.

You have a new radio show focusing on 45s. Can you tell us about the show and some of the guests you have lined up?

Yeah, the nice folks at Bondi Radio in Sydney called out for some Lockdown Session DJ’s to run some shows whilst this pandemic is going on. Far be it from me to not heed the call, so I offered my services to run a weekly 2-hour show of nothing but the “freshest” 45’s on the planet every Sunday from 8-10pm (AEST). The show is named after the label Shan and I started, Juke Joints Records, which is also the name of a monthly mid-week 45’s only party I run in Melbourne with my good mate AJ Ghostnotes (sick DJ, too) at Section 8 in the CBD.

For the show, I’ll be doing weekly 1-hour sets of funky 45’s to open affairs (with a few choice words about tracks) and this will be followed by a 1-hour set from my guests. We’re 2-weeks in and I already had Mr Lob on, Shan Frenzie was next (or was supposed to be but the station mucked it up and played a banging techno set from some dude in Nova Scotia instead – oops) and I have cats like Ghostnotes, Hyjack (sick club dancehall set), Fibs and Brain coming over the next month so lots of styles and vibes. For those that want in, just email me: obliveus@gmail.com

Have you been able to be creative through lockdown and what have been the pros and cons?

For sure, I’m finding the slow down has really opened back up a lot of avenues for me I haven’t travelled on in a long time. Learning how to properly use some new programs for writing tunes has been nice (I’m an old Acid program guy lol); drawing again (been too long); doing radio (been approached about doing some radio in another country – yay); figuring out how to really use audio visual programs for possible streaming; really digging deep through my 45’s bins (I have a lot of 45’s) and finding stuff I forgot I had; and, most importantly, spending a lot of quality time with fam. The “cons” are the same as everyone I bet, i.e. missing my mates, gigs, the gym, playing bball, watching sport and going out in general.

How do you see the DJ world adapting after the lockdown restrictions are lifted?

I’m a “half-full” guy, so I reckon it’s going to be like critical mass craziness when it’s lifted and we’ll be busier than ever DJ’ing with all the venues opening back up and people really wanting to groove out with each other again. I’m imagining post-WW2 partying will return (so glad I got all my big band 45’s ready ha). All that said, it will be a changed world. Many venues wont re-open so I think we’ll have fewer (but more economically and creatively sufficient) venues in Melbourne Town. I’m hoping it will be more like when I moved here in 2000 and the quality will be at the forefront over the quantity of venues so every gig will be packed. Wishful thinking? Possibly; it’s all I got right now. Ha!!!