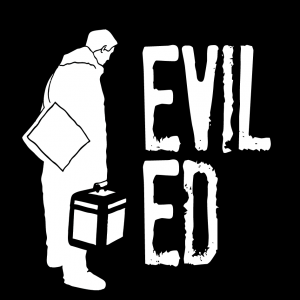 Your 45 Day mix includes some great UK and US Hip hop. Can you tell us about some of the included 45s?

I put in a couple of my all time favourite UK rap tunes on there. ‘I’m Ready‘ by Caveman produced by The Principal who was a huge influence on me and also ‘Live Like The Other Half Do’ by London Posse. I don’t have much UK stuff on 45 as I bought mostly 12″s at the time, but I’m glad to have those two as they both big favourites of mine and they’re 30 years old now. crazy!

What is it about 45s that makes them so popular

They take up less space so you can bring a few hundred to a club which is harder with 12″s and they usually sound better than playing tracks off of albums as they are louder. they sometimes have different tracks and versions of tracks on too that aren’t on albums or even the 12″.
You have recently self released a couple of your Edstrumental 45s. Is there plans for more?
I got shut down in 2008 by the financial crash and had to put the label on hold, now just as I got back into it we have the 2020 crash which is even bigger so at the moment I’m not sure. I would love to do more, but having enough funds is a barrier to that and also it’s high risk as many people are getting warped vinyl from the plants and that puts me off. My 7″s were flat, but friends have had warped 7″s back and many copies of my Remixes EP were warped and I had to dump them. So the answer is yes, if I had the funds and could be sure of getting flat vinyl.

What other projects have you been working on?

I did a lot of production in 2019 and it’s coming out this year on projects by Tesla’s Ghost, Cyrus Malachi and others. That’s moody, atmospheric stuff for the underground Hip Hop heads and some of that will hopefully be on vinyl. I have also been working more recently on the MPC live doing something a bit different, mostly just some dope loops and I’m waiting on vocals for some of those. That material should be out there later this year or in 2021. I also have a project of old beats I made in 2002 coming out soon and Edstrumentals Volume 4. They will both be digital releases on Bandcamp to begin with.

How do you think hip hop gigs and DJing will be affected once the lockdown restrictions are lifted?

They will probably have the army outside the club forcing you to have a vaccine before you go in. I’m joking, but things will be different, in the short term anyway. It could be good at big concerts as you would be able to dance with a 6 foot space around you and not have a drunk student knocking into you or spilling their pint on your new trainers. Actually it probably won’t make much difference to me as I only get about 10 people coming to hear me play anyway. But, in all seriousness, I don’t know. If the restrictions are too much it may go back to the days of numerous illegal raves like the late 80’s and early 90’s and the police probably will try to have everyone arrested under the corona laws for gathering in a group. I suppose people could say the dancing was their daily exercise.
eviled1.bandcamp.com
Criztoz Crizto On 30/04/2020   /   2020 Line Up, Interview