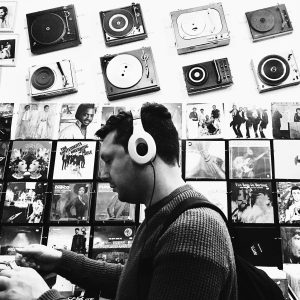 You run Just Good Beats a label that specialises in instrumental beats that are released on 7” clear lathe cuts. Why did you set up the label and how do you go about selecting the artists to release?

Before Just Good Beats I was working on another label specialising in scratch samples and making beats. Through that scene I was meeting a lot of dope beat makers known in their local scenes. After a trip to Chicago where I met Krush Love, I downloaded the Love Jones EP he did with Rich Jones. That EP kept coming up on shuffle on my phone and every time I heard it I was just convinced that it would be dope to have on vinyl and that if I got it cut I was sure someone else would want a copy and I’d end up cutting more. I guess it was blind faith in how dope I thought their music was. Everyone was down for doing the project and the label was born with the first lathe cut being two tunes from the Love Jones EP as the first release.
The artists that we now work with seem to come from just a lot of happy coincidences strung together. I’ve known LOOMS through a music forum I’d been on since 2003! Sleepin Giant, Krush Love, Rich Jones, Radius and Sev Seveer through friends. Vienna sent us a demo at the other label and then sent me a demo at JGB and it was a happy coincidence because I really liked the first demo but couldn’t do it at the time. I met Heston Brioche at a gig randomly,  we had some friends in common and knew of each other through the scratch scene. GLYFF is a wild card in a way – he came up on my IG feed and I was like how does he only have 20 views with such an amazing and unique beat style.  Overall everyone is down with the concept – this is a scene label for people that really like the music and want to hear / own it / play it on a record player.

Your vinyl releases are all lathe cuts. Why do you choose to release on this format and where do you get them cut?

There are a few really good reasons to make lathe cuts. Obviously as a small label putting out niche music it’s practical to do short run lathe cuts where we can make enough for friends and fans that want and still afford to fund the next release and keep the label going. We get the lathe cuts done by NCMP Studio who are good friends. They cut into plastic which is nothing like the old “acetates” that people talk about wearing out fast. Every record ever made starts as a lathe cut, but for mass production that gets molded and then pressed. Every lathe has its own signature sound and every cut will differ almost like a finger print – so with every lathe cut you do truly get your own unique recording which i think just makes this lovely, raw, tangible, object very special.

Your other half Constance K is also an amazing DJ. Was it your love of music that brought you together and does both of you being DJs introduce you to each to different music?

Ha ha ha yeah it WAS our love of music that brought us together. I met CK through a friend that was in the same DJ crew as her. Our first date was record digging hahah I’d say my taste was slightly different back then, I was a hardcore scratch nerd !!! We have a lot of common ground when it comes to music, also stuff we’re not so fond of but we definitely introduce each other to new music all the time. She pulls out great records for me when we’re out digging and sometimes I get it right and pull out a good one for her hahahaa
What portable decks do you have, what events would you recommend we attend and what events are happening online?
I have a modded ION with a pro-x fader installed, the classic vestax portable which was my very first portable and recently I won a Reloop Spin pimped by Jessie Dean in the Portabilist Lounge scratch battle. If you’re looking for portablist events post covid era I’d say try seeing what your local “Skratcher” crew is up to (a global organisation with local chapters of scratch heads) if you’re in London UK you’ve got to try find the  “Scratch Link Up” events – really nice and friendly portable jams at famous london spots. Hoping that the Brighton based legendary Community Scratch BBQ comes back this summer, it’s been held every August bank hol weekend for probably 15 years or more.  Online if you want to get a cut on there’s Ritchie Rufftone’s Tinychat neverending scratch room that’s on 24hrs and if you want some good beats / beatmakers i’d check Battle Ave’s SessionIn zoom sessions.

What 45s scratch records would you recommend we pick up?

Hahhaah I guess I’ll have to shamelessly plug my own record “Just Stay Funky Like ZA” that just got a repress on Cut&Paste Records as well as all the 7’s they’ve released. Turntable Training Wax and Woodwurk Records  always make great quality scratch records too.