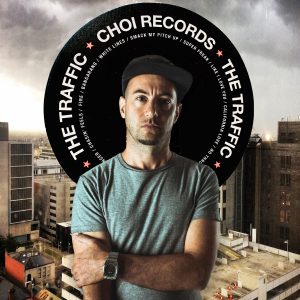 Thanks for getting involved in 45 Day. Can you tell us about your mix and some of the tracks you included?

Hey, thanks for having me Criztoz!  I really just free-styled this set, and went on immediate instinct and tracks I love. Groove or vibes are what did it for me as a drummer/producer.

It is quite varied genre wise.  Some classics and I also did throw in a few projects I am involved in that also happen to be on the 45 format.

You run Choi records and have released some amazing 45Day recently including with Guilty Simpson. Do you have some more releases in the works?

Short answer? Yes, definitely  more to come. I have had so much fun producing, working with such talented people and releasing music through the label since 2015, I can’t seem to stop. The Traffic should have our next release around late July. But before then, I have a few solo releases on the way. One is a breaks specific 45 series called Breakin’ Bad, which is just me on diff. instruments but heavily drum driven, and of course full of drum breaks (out end of May). Another new thing I am releasing very soon (April 15), digitally on Bandcamp, is a beat tape fittingly called CHoi “Antidote” Vol. 1.  That release is full of beats, snippets, vocal songs and remixes I’ve amassed over the last 20+ years.  So that is exciting to finally put out.  Its very beatsy/ hiphopesque sort of thing. Vol 2 will follow, out later in the year.

Why do you think the 45 format is still so popular?

The 45 format is great because it is way more portable that the big brother LP.  Obviously weighs much less so you can carry more.  Also it’s very collectable, not that LPs aren’t. It has a specific following. Especially in the soul and funk genres. ​It is also cheaper to make as a small label run from home lol. I love it

During lockdown I’ve seen that you have been able to remotely connect with other musicians around the world to produce a track. Tell us about the process and whether this will continue even after lockdown?

Yeah these lockdown Iso jams have been a blessing. It’s been developing over the last 3 weeks or so here in Australia. I see it everywhere now. People record a video of themselves playing their instrument and anyone can upload their video and add their own instrument. So I have uploaded about 3 or 4 drum/perc. things over the last two weeks or so and it has been so rewarding to see who takes it and where it goes. You literally don’t know who will do something till you see the video of them doing it all of a sudden. It’s surprising how much fun it is. Getting it to a level where you say. ” This could be a real tune!!” and its happened two times so far. so yeah Im a massive fan. The Melbourne scene is really eating it up and there is so much talent here I feel lucky to be a small part of it.

How do you think the DJ world will change once the lockdown is over?

Yea, this will have an effect for sure. I think it could go two ways.  Scenario one is that everyone goes nuts and loses their collective mind once pubs and bars and clubs are open. The other way it could go is that the scene could slowly pick up and eventually people will be less scared and just go out again. I think this will make most people think twice about going out. I feel it will have an effect of making some people more conscious of each others space, and that’s a good thing. All that said, I can’t wait to gig again and play the drums really missing it.