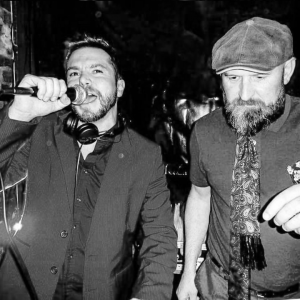 Neil (N): Hey thanks for asking us to be involved in the first international Forty Five Day, it’s great to be part of the now wider culture surrounding these little records we all love and champion.  We have seen it become extremely popular in the last couple of years which is inspiring others to get involved; long may it continue.

Mark (M): Our mix is a tribute to many brilliant funky females past and present. Bold Soul Sisters Vol:1 is made with some of our favourite 7inch that kick out their raw sound, plenty of brass, chunky guitar riffs and heavy drums that get the head nodding for us.  These women really belt out their powerful vocals with conviction and incredible bands backing them up, so it seemed fitting to place them all together.

We’ve got some early Candi Staton, Anna King, Keisa Brown and a couple from Marva Whitney in there, amongst others that are real rare gems and some cheap 45s as well, plus some newer releases too from Alice Russell, Coko, Tiffany Wilson and Fysah & The Underground Get Down.  Vol:2 is nearly finished so we will be putting that out in the summer for those that want to hear more of this concept.

You play just 45s at your events. Why do you like the format so much?

M: Well both visually and sonically, we think 45s is the best format to rock an old school funk and soul party but more importantly there is a connection between the DJ and the audience that’s different to your top 40 or cookie cutter club nights. People come to hear something more authentic in that sense. They like taking photos of the record labels and they shazam our music all the time, which is cool, we are up for sharing the knowledge rather than keeping anything secret. We’re not tucked away in a booth either, we like the up-close intimate feel with others, and we like to dance too. I think the fascination comes through having a limited set of records per gig, and that’s all we take with us down to the club. At first it was all about playing hit records non-stop but after a couple of years of doing that, our audience grew with us so it went from throwing in just a few raw funk and soul records on the night, to pretty much playing hard funk, soul, disco and boogie all night long.

DJing with 45s or vinyl in general is by no means convenient but it is incredibly fun to do and keeps us on our toes. With around 2 mins per record there isn’t time for anything other than finding and setting up the next funky tune to play.  45s are notoriously hard to work with when DJing – you don’t have as much room on the record to manipulate it and they can skip and slip easily.  We’ve done the whole serato set up, DJing with CDRs and the laptop thing before, so we know it’s a completely different practice and standard… and no disrespect to those playing it digitally, there are some incredible DJs out there; but for us we found a whole new life spinning these old records because we’ve built this scene from very small gigs to huge scale events by just having fun with them.

N: It can be exciting. picking out records and preparing the play boxes before shows. There isn’t anywhere else to go and hear this kind of 5 hours dance party in our city so we take some pride in putting it all together, both in selecting all the music but also the stage build with our bespoke lighting and décor.

We are coming up to our 9th Anniversary of the club night this year and its mad to think we’ve been playing on the first Friday of every month consistently for 9 years just with 45s only.

You do a lot of digging for vinyl. Where do you source your 45s from?

M: We get vinyl from almost anywhere. There is potential to score a bunch of great records in any outlet that has vinyl if you are prepared to put the time in and dig through what they have. My local newsagent put out a bunch of junk to sell, bric-a-brac stuff, but there was a handful of 45s in there; mostly pop but there was a couple of Ray Charles records worth having.

Around the city there are regular car boot sales, charity shops and record fairs which are a good source for 45s but that only lasts for a while. To get hold of some of the harder to find records we have to head to London and meet up with dealers there. Of course, there is always the easy online digging options like Discogs or Ebay for that unusual release or crossing one off the wants list, but it is hardly any fun in comparison. Digging in the field is a true delight for a collector.

N: We opened our own record shop last summer, called Overdraft Records, but we’ve had to close it temporarily because of the lockdown. Most months we import vinyl from overseas as well as buy up old collections. We are sitting on so much stock 45s-wise, so once the pandemic is over and social distancing is no longer needed, please come to Southampton and pay us a visit

Last year you went over to New York for record digging and some gigs. Can you tell us about your trip?

N: Doing our thing in New York was cool and everyone we met out there was incredibly welcoming. Having known some people in the scene for a while it was great to finally meet them and do some DJ sets on their turf. They hustle extremely hard for this and they’re into the 45s heavily, so it was good to discover that what they do over there is similar to our events back home.

M: The venues were fun to play; one of the nights we got to DJ at Daptone Records’ own bar in Brooklyn, which was awesome and we had a great time in the Bronx spinning records inside an old Italian deli market, which turns into a bar after hours. Finding these spots to play made it really interesting and when we got to Manhattan we played more of a boogie funk and disco set for the Mobile Mondays Crew.

We did a radio show with Brooklyn’s Kurtis Powers on The Face Radio which broadcasts simultaneously with Totally Wired Radio in London. That was great being able to talk about the whole experience, play some records we brought with us and promote the gigs while we were there.

Have you been able to be creative during lockdown?

N: Not so much creative, but it’s been a good time to go through my record collection, getting them organised and listening to it all again. Albums mostly, the occasional 45 if I can’t remember what it is, but mainly LPs which I would have bought at the time of release.  It brings back a lot of memories from my youth.

M: I’m organising records too, it’s never ending. With all our gigs postponed for some time I did a live stream recently and of course it was satisfying to actually play, but it also felt really good to be able to use it as a means of social interaction again.