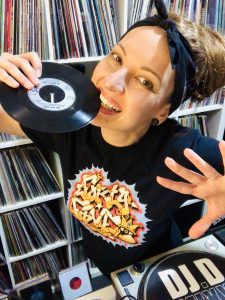 You played your first gig back in 1988. Where was it, what did you play and did you know then that being a DJ was what you wanted to do full time?

This is most definitely takin me back! It was a 21st birthday party and I remember a bunch of late nights staying up to prepare material that consisted of a combination of vinyl 7s & 12s and pre-cued cassettes. I still remember my first real feeling of crowd response, when that dancefloor filled and later erupted into a balloon fight, seeing everyone in that room laughing and having a great time – from that point there really was no turning back.

Although, as a 70s baby with few toys, I guess it was inevitable that I’d be drawn to my dad’s 45 collection – those coloured labels were like candy to me, all stacked out of their dust covers in those plastic racks; I soon became the human remote and jukebox (tv channel and record changer) for our all-in-one wooden entertainment cabinet featuring stackable turntable and domed tv that featured 2 or 3 channels. Another fond memory growing up in the 80s was that if I was a good girl mum would buy me a 7” at the local store, those pieces of wax stacked at the checkout much like chocolate bars and candy are today.

You host your own radio show 1200 Degrees. What do you promote on your show, what have been the highlights, and can you also tell us about your 1200 Twelves project?

1200 degrees Mixxbosses is a show that I relaunched late 2019, originally broadcast in 1999 on one of the first streaming servers here in Australia. The show is recorded via the turntables, the 1200s, and at present features yours truly DJ D in the mix for the first hour with a guest DJ in the second hour for our beloved 1200 Twelves project – 100 DJs from around the globe spinning 12 of their 12” vinyl records. The show gives me a good opportunity to relive all this vinyl that I have acquired in my lifetime, past episodes even feature a random 7 segment where I would randomly pull 7” records from shelf to platter, to on air. I’ve also always loved hitting original samples for classic hip hop tracks, so you can expect to hear music hitting a number of decades and genres in each show, from the 1950s to now.

You entered the DMC championship again after having great success in 2015. Tell us about how you go about preparing a set for such a competition.

DMC Championships have always been an ambition of mine, with fond memories of studying past championships on VHS tape through the 90s. I entered my first competition in 2005 as the only female competitor where I placed 8th in the Australian nationals. A decade later in 2015 I was encouraged to re-enter by industry peers, and was honoured to take 3rd place in NSW. 2020 was the year though, being awarded a DMC gold record for being one of the top ten finalists, and also receiving an endorsement from Pioneer DJ Australia at the National finals.

Preparing for such a competition definitely takes time, dedication, practice and often late or all-nighters. Personally, I like to have a central concept or theme for my sets, with my 2020 submissions revolving around paying homage to past champions and lowriding. 2020 was also the year to debut ‘more bounce’ – this mama’s crazy idea of hoppin 1200s, that is, flickin switches much like you would with a chevy lowrider, to make the turntable bounce, much like a lowrider would.

You often have a special guest on your live streams – your boy DJOhhh. Has your DJ life changed since having him and how is he getting on with learning how to DJ from you?

There’s no doubt that he has quickly become the star of the show – the self-named DJ Ohhh, who first literally hopped on the decks at the age of one. He currently takes over all my live streams as my #1 lighting guy, MC, security, and on occasion the headliner hoppin on the decks and mixer pads. Right now it’s all a lot of fun as he mosh-pits into mountains of pillows during my live sets, and throws a few at his mum, though he definitely showed a great sense of rhythm from the get go.

“Mum life” sure has changed things a whole lot – having to decline national and international touring, club gigs and various events. Even so, I am super grateful to still be able to do my thing in some way or form – via the radio show, live streams and mixtapes amongst other DJ projects. It’s also pushed me back in the recording booth, hopping on the turntables and also the mic for various track collaborations; notably a number of tracks for King Quez/Quez Outlaw (Outlawz) such as the current single ‘Keep Ur Head Up’ and previous favs including ‘DJ Bring it Bacc’ & ‘The Groove’ also featuring Stormey Coleman (Outlawz) – I note this last track as I have fond memories holding my then baby boy and recording the vocal lick for this one.

Aside from DJ’ing you are also part of the lowrider scene and own a 1964 Chevrolet Impala ragtop. How and when did you first get into low riders and can you tell us about some of the celebrities you have hosted in your impala.

Ahh yes my first baby – my 64 impala ragtop. This car was a dream of mine since my early teens, I’d always had a love for the classics though fell in love with this make thanks to video clips such as Dr Dre’s ‘Let Me Ride’ that solidified my love of these vehicles – with those aerial shots of the 64 impala Dre is driving, and especially the moment there is a female bouncing a chevy on hydraulics. It was that moment I said to myself that one day I would do that too.

It’s been a dream to host international artists in my 64 impala, once again artists that I grew up listening to. These have included Xzibit, King Quez (Outlawz), Chauncey Black (Blackstreet), Tha Alkaholiks, DJ Yella (NWA), Curtis young (Dr Dre’s son), Baby Eazy E (Eazy E’s son), Spice 1, Freedom Williams (C&C Music Factory), Ty Dolla Sign, and Masta Ace (Crooklyn Dodgers) amongst others, who have signed the inner lid of the glove box – something that I often feature at car shows.

More recently, I’ve been honoured to join Majestics Australia – an international car club that has roots that go deep into lowriding history, feel free to check out the documentary ‘Sunday Driver’ if you haven’t already. And stay tuned for a special project coming soon called #StraightOuttaTha64

Finally, it’s been an absolute honour and pleasure putting together this exclusive mix for Forty Five Day, with much thanks to you and the Forty Five Kings for re-igniting my absolute love of this 45 format.