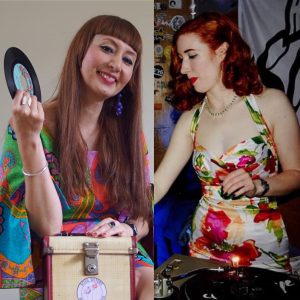 You successfully set up Wanita in 2018 to promote women in music and female DJs. How have you found the process and how has it been received?

Jawa: The process has been eye-opening. The sole purpose of Wanita is to promote women in music and offer a platform for female DJs to get more involved in the male-dominated music scene. It has been received positively both in Munich where I started in 2018 and in London the following year as we are showcasing awesome female DJs that don’t get a chance to DJ that often. What we offer is pretty niche; we play only female-fronted music from the 50s through to the 80s on vinyl, so it gives the DJs & listeners the incentive to dig & learn about female artists from different genres during this time. Running Wanita has also taught me that there is a lot of work behind the scenes to make the night successful, it’s not just about showing up with records & then the punters will come – I wish it was that easy! Being a female DJ & promoter you also have to work that bit harder to prove yourself, that you’re not just a pretty face behind the decks. It’s an evolving process where I’m constantly learning, so it’s fun!
Ginger: Having joined forces with Jawa has been great as we can really utilise our different strengths. I’ve run various nights in the past, this is the first one that had such a clear message and sense of identity. Having once been described as ‘bringing a kooky style’ to a gig where all the male DJs had their choice of records commented on, we wanted a night where the DJs would be judged solely on what they were playing, not how pretty their dress is. As cheesy as it sounds, there is a real sense of sisterhood among the DJs we’ve had come and spin. I’ve found women DJs are much more likely to come and tell you they love your records and ask who it is rather than just peer over the both to try and read it off the label!

You have had some great guests at your events and also for your online mixes. Can you tell us about some of the DJs and why you have chosen to work with them?

Jawa: We invite DJs who we love and respect; we love the music they play and look up to them for either the nights they run themselves or the work they put into their radio shows. One of them being DJ Honey, a successful DJ in her own right who put a lot of effort into her radio shows. Her Kiss Kiss Bang Bang show inspired me to run Wanita & she has always been supportive of what we do. I was so thrilled to have her play at our first night in London last year. Our night is also open to women who collect & love vinyl just much as we do and would love a chance to spin their records in public.
Ginger: It’s great being able to invite DJs whose work we have admired and see how they command a room. Having DJs from all over the world is particularly great as it really broadens the scope of artists played – we’ve heard some fantastic Chinese, Spanish, Japanese and Portuguese covers of already great songs. As far as the online mixes go, I’ve particularly enjoyed DJ La Vamba’s mix – she DJs out of New York City so we don’t often get a chance to see her play in real life and she has awesome taste.
With club nights on hold for the foreseeable future, what plans do you have to push Wanita forward and increase awareness of your brand?
Jawa: We have been inviting female DJs from across the globe to make WANITA mixes of their favourite female-fronted music which we upload on our Mixcloud channel every two weeks. I do a live DJ set every month on Twitch Tv, have a regular show at Soho Radio with Mono Loco Mixtape and also regularly post female music-related content in our social media accounts.
Ginger: We thought not having a ‘real life’ club during the lockdown would be a disadvantage, but it has actually meant that we can invite DJs from all over the world who wouldn’t necessarily have a chance to come to London.
Can you tell us about some of your favourite artists whose records you spin at your events?
Jawa: I have so many! But Etta James, Sugar Pie DeSanto, Betty Wright & Lulu are always in my box.
Ginger: I agree, there are so many fantastic artists that deserve a mention but I’d have to say Ann Cole, Tina & the Ikettes, LaVern Baker, a myriad of girl groups including Marta Reeves and the Vandellas, The Velvelettes, The Flirtations and I can never say no to Mae West’s rock’n’roll albums!
What advice do you have for any aspiring DJs or artists
Jawa: Be true and proud of what you do. Being a DJ & running a club night is a lot of work but it’s important to have fun while you’re doing it. Show your love through the music you play & the night you run.
Ginger: Buy records because you love them, not because they are worth lots of money. I’d always rather play a 50p record that gets the whole club dancing than wasting £50 on a dud because it will impress a handful of collectors. Like Jawa said, having a successful night is a lot of work but it’s worth it when you see a room full of people enjoying what you do.

Find out more and follow Wanita on their social pages