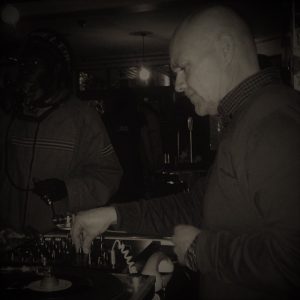 Thanks for your brilliant reggae mix for 45 Day. Like myself you are clearly a big fan. Why do you love reggae 45s so much and can you tell us about your setup and the effects you were using on the mix?

Thank you for inviting me to submit a mix for 45Day, it was an absolute pleasure putting it together and really glad you enjoyed it – seems like so long ago now!

My love for Reggae 45s and more so Jamaican music, stems from my discovery of 2Tone and buying those 7s in the mid 80s during my teen years. After completely immersing myself into the music, culture and political/social messages of the Specials, The Selecter, The Beat, Madness and anything which had that kind of sound and sentiment, I found that a lot of the tunes were covers or borrowed from the early Jamaican records and traced the influences back to their roots. It was then, after hearing music by the likes of The Skatalites, Prince Buster and the Maytals on Trojan comps that I really delved in to buying Jamaican music on 7s – not very easy to come by for a young kid in Sydney either. At first it was mostly 80s Studio1 and Treasure Isle reissues that came in from the U.S, then from periodic mail order catalogues sent to me from the UK. Since then I’ve kept on collecting – from Ska, Rocksteady and Reggae oldies, Roots and Digi, from 90s Dancehall to modern Jamaican and outernational releases. The mix I put together for 45 Day comprised of a fistful of those modern tunes – most of which were based on the foundation riddims. From memory I don’t think I actually used any effects in the mix other than the tape delay from the Korg Zero4 mixer – although I do have a small collection of dub sirens that get abused, usually! – and 2 Technics 1200s.

Can you tell us about some of the tracks you have chosen for this mix?

For this mix I thought I’d steer away from Reggae and explore something a little way different. There is a theme running through the mix which starts off with a couple of laidback instrumentals then gradually builds up into more up-tempo territory. It’s a bit Soulful, a bit Funky, a bit Jazzy and some renditions of tunes you’ll recognise all with an added Latin twist – lots of congas, timbales, flutes, brass, (cow)bells & whistles. Most of the tunes I’ve chosen are straight outta my playbox and get regular spins at my gigs, but some I haven’t played or listened to in a while so it was nice to reacquaint myself with them for this little session – hope you enjoy the selection!

You have built your own sound systems for your events and have heavyweight and compact versions. What does each system consist of and why is the sound system so important for Jamaican music?

Well, to be fair, I didn’t build both rigs – I’m not that skilled unfortunately!

It was built by myself and a couple of mates (who own and operate it) – with help from a few others along the way – over a couple of years in an effort to fill the void of Reggae soundsystems in Sydney. At the time there were plenty of rigs stringing up in Melbourne and others in Adelaide and Perth but nothing around our home town that was focused strictly on Reggae vibes, so we set off on a mission to cut, glue, screw and lacquer what seemed at the time like a million panels of ply wood and it ended up looking, and more importantly, sounding like a proper soundsystem! As soon as word got out there was a Reggae stack in Sydney we were offered a bunch of local gigs including The Reggae Carnival which hosts local and international performers – held twice a year at the beginning and the end of Summer – and were lucky to power shows for a heap of internationals including Mad Professor and YT early on, Sister Nancy and more recently Rodigan, Jstar & Soom T, Deadly Dragon and DJ Shortkut – who graced us with a top notch Reggae selection ala his ‘Blunted In The Bombshelter’ mix from all those years ago.

The second rig – Sonic Sound HiFi – is something that I customised and built up from a bunch of speakers that needed a bit of TLC – 2 x 18” subs, 2 x 15” full range (Kick bass. Mids, horn), a double 10” mid/high box and 2 x double tweeter boxes. I stripped them, sanded them down, replaced whatever hardware needed replacing and brought them back to life with the aim of using the stack in smaller venues playing mostly old time Jamaican music – Ska, Rocksteady and early Reggae – as well as Funk, Soul, Latin – a more mixed bag musical selection. It’s also the stack I use at home as my listening station in my 45s room – I also have a smaller stereo in my lounge room for listening to LPs.

The importance of soundsystems in Jamaica just prior to and following their independence was crucial to spreading music – both local and international – to the masses. The places where the label and studio owners chose to string-up their rigs were in and around the tenement areas. The people who lived in these neighbourhoods couldn’t get to the nightclubs where bands performed and soundsystems brought the music to them, at a more affordable gate rate. It also provided a platform for the producers to flaunt their latest recordings and scope the crowd’s reactions – this would determine whether or not the record, prior to hitting the marketplace, would be a good seller or if it was even worth pressing up and releasing.

From those early days in Jamaica soundsytem ‘culture’, as it’s become, has now spread worldwide and pretty much anywhere you go you’ll find a locally built rig, with a loyal following, blaring just about any form of bass heavy music.

In January 2020 you got to support one of our favourite DJs – Rodigan. Did you get to meet him and if so what was he like in person?

Yes, supporting Rodigan on his Sydney show was a definite a highlight and again, seems so long ago. I did get to meet and chat with him briefly before he went on stage, nothing in depth though and he left shortly after his show as he had an early interstate flight early the next morning. He was a gentleman with a real kinda Rude Boy way about him.

You recently cleaned up an old Citronic Hawaii console. What is the appeal for these old systems and how do they compare to modern day decks?

Ahhh, the Citronic – seems like that’s gonna be the perpetual ‘work in progress’! I haven’t been able to do much with it since I cleaned it up and stuck a couple of new carts on it earlier this year. Still need to have the internal electrics checked as it has some real gnarly buzzing going on and I can’t locate the source of it. Personally, it’s not the sort of thing I’d rush out and buy but seeing as it was given to me I thought I’d take it on as a restoration project. It sounds pretty good actually, aside from the intrusive buzz – a couple of nice Gerrard decks and a Citronic mixer all nicely packaged in a wooden case makes it compact and lightweight enough to carry around by a single handle – I guess that’s the appeal, same can’t be said for transporting 2 tech 1200s and a mixer – that’s back-breaking work! Sound wise, I suppose it all comes down to the system your running it through – the right amps, speakers etc tune correctly will bring the niceness out of any system, that’s what I’ve found anyway.