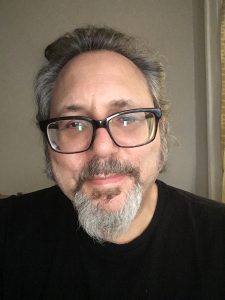 What was the first 45 you bought, what drew you to that particular record and what is it about 45s that you love?

The summer after second grade, I bought a copy of a record I was obsessed with from having heard it on the radio a million times: the No. 1 single “Ben,” by Michael Jackson, on Motown. I got it at the Sears department store on Woodward Avenue in Highland Park, Michigan, about two miles from our house in Detroit. Michael Jackson was, of course, huge in my Detroit public elementary school at the time. The first 45 I bought that I’ll call a “collector’s 45,” when I was 22, was “Oo-Ma-Liddi,” by J.J. Jackson, a weird, raw 1961 R&B single that I still DJ with occasionally. I knew it from a compilation LP, and the sound was exotic and super-exciting to me. When I saw it for sale at a shop called Sam’s Jams, in Ferndale, Michigan, I decided I had to have it in its original form. And that opened the floodgates. I love the simplicity of 45s, their physicality, their individuality. Albums have too many loose ends and too much unnecessary frippery; CDs do too, and they’re physically unappealing to boot.

I understand that you have a huge collection of records. What genres do you particularly collect, how do you go about organising your collection, and do you ever lose records?

I collect soul, and by that I mean 1950s-70s soul, R&B, funk, blues, gospel, doo-wop, instrumentals, deep soul, sweet soul, Latin soul, and popcorn, as well as contemporary releases….On the periphery of those sounds I also have some country, rock and roll, and uncategorizable stuff. All of those subcategories get their own sections in the filing “system,” some big, some small. I also file by region (Detroit/Michigan, New Orleans/Louisiana, Chicago, Florida) and in a couple of cases by label—King/Federal, Atlantic. Boxes for specific types of DJ parties, too: weddings, bar nights. Then there are boxes of stuff from a long-ago semi-abandoned simpler system of just filing everything together alphabetically by artist. And THEN there are the boxes and boxes and piles of random unfiled/unassimilated records. Understand? I don’t. And I often misplace things, which is nerve-racking. Don’t ask about the time I left a box of 50 records on the subway. Or the week I just spent obsessively searching and re-searching for a missing Dade 45 that was right under my nose.

During this crazy year what have you done to keep your creative juices flowing and what shows/projects are you currently working on?

I’ve been devoting more energy to my 26-year-old weekly radio show (Downtown Soulville, on WFMU. New Jersey, USA), which I now broadcast from a rudimentary home studio instead of from the superior—in terms of both hardware and ergonomics—setup at the radio station. I’m winging it less and doing more special thematic shows, including, lately, a Florida soul extravaganza, a Latin boogaloo-palooza, and tributes to Earl King, Ruby Johnson, and Little Milton. I’ve been doing more filing projects and getting to know my collection better. I’m also looking forward to the release of volume 5 of a King/Federal compilation series I’ve been working on for Munster/Vampisoul Records in Madrid called R&B Hipshakers.

If money were no object what 45 would you buy and why?

Money isn’t the only issue; there’s also the question of availability. Many of the 45s I’m after exist in single-digit quantities and rarely come up for sale. But one I’d happily shell out for if I had the opportunity is Lester Tipton’s “This Won’t Change” on Detroit’s La Beat label.

What advice do you have for anyone wanting to get into the world of collecting rare 45s.

One thing that’s always bothered me is the phenomenon of the new collector diving in and going straight for the rarities instead of growing an organic collection from the ground up with the basic seeds of Motown, Stax, Atlantic, King, etc. Don’t sleep on the common stuff. Also: Give things a chance to win you over. Some of my favorite records are ones I scooped up long ago that I liiiiiked but that didn’t necessarily floor me at the time. They weren’t calling out for me to play them, but I filed them away anyway, and after years or decades of “seasoning,” they sounded completely new and amazing to me when I dug them out again.