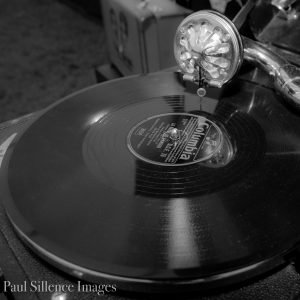 Following on from Nick Carlings article on 10″ records, we asked Professor Gramophone to tell us about his love of 78s.

I’d been in and around a few vintage events through my partner as she was in a three part harmony group performing music from the 1940’s & 50’s. When she also took me to an eye-opening vintage revival night in Berlin and that was it, I was hooked. There was all this forgotten music out there, Swing, Big Band, Ragtime and Blues. Why weren’t people listening to this anymore?

A chance opportunity at an antiques sale later and for only £35 I found myself the proud owner of a 1935 HMV gramophone and a clutch of shellac 78’s.

I loved my gramophone, I knew nothing about it and its records but I showed it to everyone. Truth be told, some of the 78’s were a bit of a miss, poor sound, poor recording, poor music but every now and then you’d pull out a hit; an original copy of Benny Goodman and Peggy Lee’s ‘Why Don’t You Do Right?’, some Elvis, Chucky Berry’s ‘Rock Around the Clock’ or anything ‘Ragtime’. Not only that but it was a tactile experience too, winding up the gramophone, the crackling sound, the selection, reading the label and not knowing the artist or the tune but most of all it was a fun, vintage nostalgia trip.

What really surprised and helped me was that people started giving me 78’s. They came out of everywhere “Granny had these in the loft and we wondered if you might want them?”, “I can’t sell these, you might as well have them”, “We never had anything to play these on, are they any good for you?”, and pretty soon I was measuring 78’s by the yard. The coup de grâce came when I was talking to a vinyl trader. He’d picked up an entire collection of rare 78’s (give or take in all about 200 records) from someone that BBC Radio 3 (a classical radio channel) used to come to when they didn’t have a particular recording. He’d passed away and the collection had gone to this dealer. The heart breaking thing is no one wanted these unique, one of a kind recordings and this dealer needed the space back. I bought the lot for only £50. Too cheap really.

This is probably a good time to mention that contemporary music systems and PA’s have desks, levels, multiple speakers and inputs, all to provide control and consistency. Gramophones, unfortunately, are exactly the opposite. 78’s may only last ten plays before they give up, the volume is fixed and there are no ways to control the levels, plus every needle (which needs changing after every record) has a different tonal quality. Ok, the needles are relatively easy to come by, vintage shops often have them and manufacturers still make a range of products now but there isn’t the constituency that we’ve all come to expect from a modern stylus.  If I was going to play this music out and try to get people to appreciate it again I had some work to do.

First I needed a name. After several glasses of wine for inspiration I lighted upon an Agatha Christie novel from the 1940’s and dreamed up the terrible name ‘The Butler Did It’. Now, in my naivety, all I had to do was work out a way to manage the levels, amplification and quality of the 78’s and I’d be on my way. Easier said than done, I reached out to sound techs and people in the industry for help and inspiration.

The first suggestion was a simple work around, “What about if we just point a mic at the horn?” well, now we could make it louder but even through a desk there was no level control and no bass. There was never any bass. It was at this point I discovered that to produce 78’s in bulk it was cheaper for manufacturers to ignore the bass. Have you ever been to see a set with no bass? No. Neither had I. Until now. My head was in my hands. I simply can’t be charging people to listen to such bass-less poor tonal quality music for any length of time.

A few experiments with a modified guitar pick up and a lapel mic pointed at the sound box later and we were no closer. The quality just wasn’t there. I was distraught. Would this ever be anything more than a novelty?

The solution, however, was simple. Staring me in the face. Mix old 78 music with modern vintage. And it worked! It was everything I needed to show off vintage and forgotten music. With two polished gramophones, an amp, a mixing desk, a fistful of hand-picked 78’s, I picked up a residency in a St. Albans pub and regular slots at vintage revival festivals. ‘The Butler Did It’ was dead and ‘Professor Gramophone’ was born; more gigs soon came. I was on my way and the 78 was the star!

But here’s the sticking point. The bookings started getting a bit bigger and later in day. That’s a good thing eh? I started getting gigs specifically requesting “Evening music”, “Something people can dance to” and pretty soon that’s all I was playing. The Gramophones were still on the desk but just as show pieces, everything was being played through the decks straight off USB. Digital music, the mortal enemy of the 78. The original 78 was gone again.

And to this day it still is. As Professor Gramophone, I’m purely an ElectroSwing DJ now and I love that too. It’s led to some great opportunities but the truth is my heart is still with the 78’s. Nothing makes me happier than an evening with a few shellac records off the pile. I can’t recommend it enough. But it’s time to be honest, the revival that’s happened with vinyl, and that is clearly now spreading to cassette tapes won’t happen with 78’s. Our ears are too finely tuned to expect quality and that’s why the 78 fell out of favour. Plus each shellac record is so very fragile, so easily broken or worn out. That favourite pressing don’t last long. Playing them over and over is destructive, negligent. I’ve lost too many good 78’s that way.

However, what can’t be ignored is the gramophone is an integral part of music history and I now find myself something of a proud shellac collector. I have more 78’s than I’ll ever be able to listen to but they’re never going anywhere. These won’t be thrown away, I’ll love them and I’ll care for them and I’ll play them to anyone that wants to listen. There is an ever present charm in listening to music the same way it was brought to people generations ago. I can’t ever get over the fact that these pressings are so very old and may well be the last recording ever made of some music and without taking good care of them, they could be forgotten forever.

So, for me, that is where they now belong. Brought out on occasion, treated them with the deference of age they deserve, enjoyed for all their flaws and recording quality and a nostalgic reminder that this is where the vinyl journey all started.

Some nights the old tunes are the best. 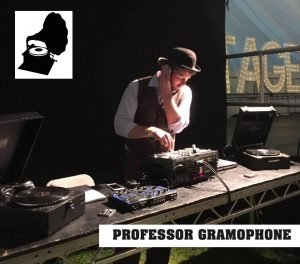