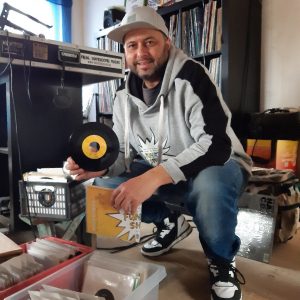 When and how did you first start DJing and which DJs have influenced your career?

I first started recording  tapes for discotheques when I was 12 years old, it was the very beginning of the 90s. I bought my first vinyl record in ‘ 96, when I was 16 years old. After that, I couldn’t stop buying records as soon as I had the money. At that time, I was absorbed by the raves, most of all I loved The Prodigy (and even now I consider them the greatest musicians and have all their records, including 45s). So in the mid-90s, I loved gabba or electronic hardcore. Actually, the DJs who influenced me then were from rave. These are Westbam, Marusha, Slipmatt, Paul Elstak, etc. But I also liked hip hop at that time, and soon, when I learned how to mix 2 records, I began to pay attention to scratchers like Q-Bert and Mixmaster Mike, but only as a spectator. I seriously started trying my hand at scratch and turntablism only in 2015, at the same time I stopped playing on raves and began to collect hip-hop and funk, a couple of years later I bought my first pack of 45 and fell in love with this format, here it is already worth saying thanks to such DJs as Nu-Mark with his series of  Zodiac Tracks mixes and DJ Koco, then I saw all the other leading members of the 45 movement))

You are based in Russia. Can you tell us about the 45s scene there, some of the venues you play at and other 45s DJs we should check out?

Unfortunately, the 45 format is not popular in Russia. Very few people play 45s, all of them mostly from our cultural capital of St. Petersburg. And mostly this is intellectual funk,  I haven’t been in this movement for a long time, so I may not know something or someone, I’m sorry about this. I live in the south of Russia, in Rostov – on-Don, there are only 2 people, including me, playing 45s, and even then it is rare, Mostly 45s I play in Moscow, St. Petersburg, in the Crimea. The main players are Pasha Bronx, Soul DJ Smirnoff, Tony Lavrutz with whom we released the edits on the Beastie Boys together, Scream from the Crimea, Nazin, Baz DJ, the founder of the label Spasibo and some others, and your humble servant.

You have released a series of great 45s edits. How do you decide on what tracks to re-edit and can you tell us about your production setup?

Thank you, I am very happy that my edits are liked by so many people around the world, I admit that a year ago I did not even think that this was possible. The first 7″ edit I did because I was missing the Prodigy’s  Funky Shit  for the set, hence the label’s name. When I made a small first batch, it turned out that a lot of people wanted it and had to do more, and so it went. I choose the tracks based on my own needs, if I’m missing something for a set and it wasn’t released on 45, I do it, but the new release will no longer be edits, but full-fledged remixes on Deep Purple. My setup is simple – a turntable, a mixer, and a laptop with the LogicX program.

You are working on a new release with Andy Cooper. How did this collaboration come about and can you tell us about the release?

I always strive for the next step, there were edits, remixes will be released soon, so it is quite logical that the next step is an independent track with an original rap. Who is currently number one? Of course Andy Cooper. I already sent him a beat some time ago, but he didn’t like it very much, and recently I made another track that clearly lacked rap, first I put the Q-Tip’s acappella there and it sounded just awesome, I decided to send it to Andy on the same day and he said yes! I’m sure it will be a hit and definitely my best record at the moment. I’m sure you’ll all hear it soon!

What else do you have planned for 2021 and is there the possibility of you playing at real live events?

I want to release a couple more records in 2021, to become a world star. hahaha and I would very much like to go on tour in Europe and the UK, but making plans is not a grateful thing, so, as we say in Russia, we will wait and see!

What does nick Paul Sitter mean?

Polesitter — the man who starting from first place in motorracing. I am a Formula-1 big fan since 1992