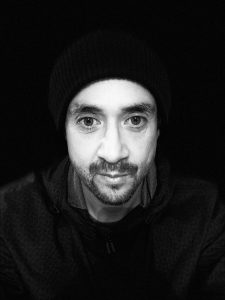 You are a big fan of 45s like myself. When did the 45s bug first hit you, where do you sourcing your records, and is there any particular styles/genres that you steer towards?

I started buying 7″ records back in the mid 90’s but back then I was buying mostly indie 45’s from bands I liked. I guess the big bug really hit me when I started DJing around 2012, that’s when I started looking for all kinds of genres. I mostly look for funk, soul, latin, hip hop and whatever is in between. Getting a hold of records can be a challenge because there’s not many record shops here in Tijuana or good digging spots so a lot is done online, when I travel and some on trades.

2020 was a crazy year with most people living most of their music lives online. How have you found the 45s community during this time and has it inspired you as a DJ?

For me it’s been like a blessing in these crazy times to have a community where you can share the love for music, learn, and meet people from all over the globe with the same passion as you. Inspiration to get on the decks 100% !

You have recently appeared on some live streams for the Forty Five Kings including for my recent birthday stream. How do you find live streaming and how does it compare with DJing in real life?

At the beginning of the pandemic I found streaming frustrating because of copyrights issues when you would use Facebook or Instagram. Now with Twitch those frustrations are gone but I find myself trying to build a following. It’s a completely different feeling as DJing in a club or bar because of the crowd element not being there in front of you and the energy of loud music but in a way it’s still nerve-racking to have a camera in front of you and not knowing who is watching. I’ve learned a lot from watching live streams, lots of good music that I didn’t know, and you can watch DJ’s from all over the world that I’ll probably never get to see in person.
Can you tell us about the music scene where you live in Mexico and in particular any record shops, venues or events that we should check out.
I live in Tijuana Mexico, a border town to California USA, there is really only one decent record shop here called Ciruela Electrica. Tijuana has a lot of bars and microbreweries but most of the music played at these places is electronic dance music. A good place to start is La Mezcalera, there is always something going on there and it’s mezcal is pretty good. Tijuana is a great place to visit for its food also and if you like craft beer, you can’t go wrong there with so many options. As for me as a DJ it’s a challenge at times to play here especially when these places don’t have turntables, most are equipped with just CDJ’s.

In addition to your decks and mixer I’ve spotted some synths in your studio. Can you tell us about some of these instruments and the music you produce/play and about your new 7″ release?

I’ve been playing collecting instruments since the mid 90’s, Moog synths and samplers have always been part of my studio. I guess you can call the music I produce indietronica, I use a bunch of synths sounds and sample beats to make a bliss of sounds, kind of spacey. I’m influenced a lot by early 90’s shoegaze music and hip hop. Around 1999 I was signed to a UK indie label called Rocketgirl where I released an album under the name Loopdrop. Back around that same time I was playing out doing live sets. In the last couple of years I got an itch to do live shows again and last year I released a new single under the name Loopdropkid y Las Máquinas, it’s kind of where I left off since my last release in 2001.