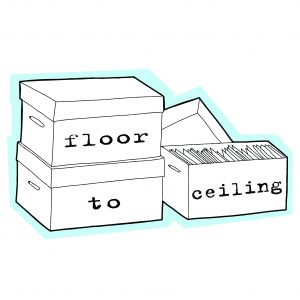 You may have guessed by now that I love 45s. I mean I really love 45s! I and many others think that it is simply the greatest musical format ever created back which is saying something considering it has been around since 1949. More and more DJ’s it seems are either switching entirely to 45s or incorporating them into their sets. It was about time that a 45s only radio station was set up and this is exactly what Floor to Ceiling have done. I asked Rich – Crate Invader – to tell me a little about the station

We’re floor to ceiling radio, and we believe we’re the world’s first vinyl 45 only radio station. Based in London we stream live to the UK, US and Canada and worldwide via the radio directories.

FTC was created out of a love for great music, especially music available on the humble 7” single, small but perfectly formed and punching way above it’s weight.

We want to showcase what an amazing format the 45 really is, with so much amazing music only ever released on 7”.

We struggled to find 45 only shows on the radio and the few we did find were dotted here and there all over the place, which led us to the conclusion that in order to listen to the music and format we wanted to on a regular basis, we’d have to do it ourselves and thus ‘floor to ceiling’ was born.

We want to give 45 DJ’s and collectors a platform to express themselves and their music. We don’t care how many ‘socials’ you’ve got or what clubs you’ve played at. For us it’s all about having a passion for music on 45, always was, always will be.

We’re a non commercial, non profit station and our focus is on bringing you great music and hopefully expanding your musical horizons in the process.

Our awesome DJ’s & Presenters are all avid 45 collectors who have one thing in common (apart from collecting 45’s) the need to express themselves through their music by sharing it with you. Amen to that.

Join us on Sunday 9th May from 8am where we’ll be streaming 45 only shows for 24 hour continuously with some of the deepest diggers in the game.

Finally the 45 community has got it’s own dedicated online radio station!

You can also check out Crate Invader’s 45 Day Mix