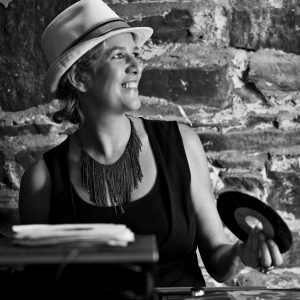 You purchased your first record aged 9. What was it and do you still have it in your  collection?

It was Bernadette by the Four Tops and yes I do still have it surprisingly, as I have moved around a lot and lost many other possessions in my life.

You were born in London and that’s where your career started. What venues were you playing at and what was the music scene like in London at that time?

I moved up north when I was 12 and later went to Sheffield Poly which was where the DJ bug started. I would make mixtapes for many of the student house parties and started doing the odd club night just for fun, I didn’t even see it as a career back then. Then I moved to Brighton in 1989 played at the Zap Club and had a Friday residency at The Escape now known as Patterns. I moved up to London in 91 and joined Fresh n Funky a very successful Wednesday night party it took off from there, guest spots like Rotation at Subterranea and Flava of the Month which was THE night for Hip Hop back in the early 90s.
You then moved to New York and have held down 45s and other residencies and worked with some amazing artists. Why do you think people still love the 45 format so much and which artists/DJs have inspired you the most and why?
The feel of 45s is more delicate than a 12. which makes them trickier to play as they can skip which is fun to conquer and songs are shorter, average 3 minutes so it keeps you moving. You can travel with a bag of 75 to 100 way easier than 12″, which is great, because luggage is a pain!
Operator Emz who started Mobile Mondays! in 2011 and pretty much kicked off the 45 movement, is a big inspiration to me and a very knowledgeable DJ. Another of my favorite 45 DJs is Rockin Rob from the Bronx, he has a perfect balance of entertaining a crowd and turntable skills. Its also been great to DJ alongside some of the producers whose records I’ve been playing for years, Large Pro, Psycho Les, Spinna, Jazzy Jay, Mr Len and one of my most memorable events was when Biz bought his 45 Technics Turntables down to the club. Then of course all the other residents I play with at Mobile Mondays! Natasha Diggs, Just Blaze, Joey Carvello and Money Mike inspire me constantly.
I was one of the millions who viewed your video (several times) from Uptown Bounce in July 2017. Why do you think that particular video blew up in the way it did and what impact did that have on your career?
It kinda broke all hip hop stereotypes, being older white and female and my outfit was pretty unflattering lol which probably made it all the more real and very unexpected to hear Biggie, Redman, Black Sheep, Brand Nubian and vinyl to boot. The theme was the 90s and the crowd had been waiting for someone to play hip hop so when they realised I was going to give it to them, they lit up and the video captures that too.  The tagline on the post only said  ‘don’t judge a book by its cover’, which aroused curiosity leading to clicks, some of the people who shared it were Bootsy Collins and Common and also World Star Hip Hop. It made a huge difference initially and I got to go on Hot 97, Sway in the Morning on Shade 45 and gigs across the country and it connected me with some of the hip hop artists I was huge fans of.  The only downside was that although it reached 28 million views, The guy that filmed it (shout out to Eleuterio Olmeda) didn’t know who I was and couldn’t tag me, so most of those people know me not as DJ Misbehaviour, but ‘that older white lady who played the hip hop’, I went to a club in Chicago and this guy was like “YOU! You’re the school teacher from that video”. haha
You were recently part of a 24-hour live stream on Instagram for Catch A Groove. Tell us about your love for that particular London record shop and also how you feel about live streaming?
Record shopping in the 90s was an integral part of DJ life and Soho was one of the main destinations with so many in such a small area it was heaven and you’d bump into so many other DJs and artists doing the rounds  I would head to Deal Real for the Hip Hop, then Catch a Groove for RnB and some of the more popular hip hop releases, then Soul Jazz for rare grooves and funk, etc.  Matt White worked in Catch a Groove and we connected again last year when he and his wife came out to NY and it was really nice of him to include me in the Marathon, although all the DJs were in their homes there was still this great feeling of camaraderie, I had a ball.
I have a love-hate relationship with streaming, I’m not so comfortable with video as radio, so I have to really push myself. Once I’m on I forget about that and I love it, except for the uncertainty of being shut down for copyright reasons cos that sucks and messes with your flow.  Lockdown forced me to do more live streams and learn new programs like OBS  and now I have a Twitch Channel too. Learning keeps you young and relevant. That is a silver lining in this 2020 madness.

Find out more about DJ misbehaviour on her social pages