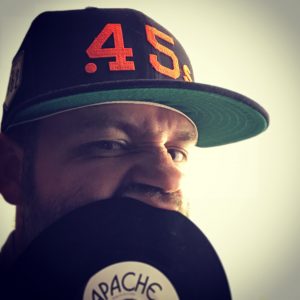 When did you first start DJ’ing and at that time what music were you into and why did DJ’ing appeal to you?
It was sometime in 92 – my brother already had turntables and had been playing breakbeat/hardcore. My tastes were fairly eclectic but through hip hop and acts like Coldcut, Bomb The Bass, MARRS, etc., I was interested in sample-heavy stuff – the idea that you could take songs from completely different eras, styles and genres and put them together was amazing – and there was something about the breakbeat tunes of the era that captured my attention, the beats and the samples were rough and there was a real DIY feel to a lot of it (a lot of them were samples of hip hop tunes, which in turn were constructed of samples, so I guess it was all a bit ‘meta’). My brother taught me rudimentary beat matching and mixing skills and by the time I’d gotten good enough to consider myself a DJ those sorts of tunes had evolved into Jungle and Drum and Bass. I was at Uni and Drum and Bass was the the thing, so I started playing out as a Drum and Bass DJ (whilst still collecting and listening to Hip Hop, Soul, Funk, etc.). After a while (and inspired by mixes like Coldcut’s Journey by DJ) I finally started to mix different types of music from my collection and became less of a ‘genre’ DJ and more eclectic.
Collecting 45s is a real addiction. When and how did you first get the bug and how addicted would you say you are?
What? nah, I’m fine – I can quit any time 😉
Like most folks around my age and older, theres a massive nostalgic thing around 7 inch vinyl – they were the format of the day when I first started buying my own music and they were affordable – I think I always bought a few here and there and still have many of my early purchases. I’m probably not unique in saying that hearing/seeing ‘Brain freeze’ really re-ignited the spark. A bit later down the line, following a disastrous house move and more recently a flood that both caused damage/loss to a chunk of my 12” collection – my focus is pretty much on buying 45s – Not exclusively and I’m not really a hardcore collector (my collection is modest by some standards) – I really enjoy playing and mixing on the format – it moves quickly (short tunes!), it’s a challenge and you can cover so much ground in even a short set – It reminds me why I wanted to DJ in the first place. Playing vinyl is also time away from the screen, like most folks my job is staring at a monitor, so doing something that is ‘analogue’ feels good.
Like many of us you have a day job – in your case a designer – and you are a DJ by night. Do you find that these two parts of your life complement each other and if so in what ways?
I definitely count myself lucky that I found a career I enjoy that helps subsidise the record habit. There’s the obvious things like the skills to produce logos, flyers, etc. and when I was studying art and design at school ‘I want to design record covers’ was always the answer to ‘what
do you want to do when you leave?’. I do think LP covers gave me an appreciation for design from a pretty young age and looking back at older LPs gives you a sense of the Pop culture of the time, or the imagery associated with Genres/subcultures. Obviously there’s an element in both that scratches a creative itch, but also in both you tend to work through techniques / ideas / mixes over and over until you’re happy (or at least I do) it brings out a little bit of the perfectionist in me.
You created the 77 Sevens project and you have told us all about it in a piece for the site. How is the project progressing and what plans do you have for it?
It was always just an idea to get 45s DJs who wouldn’t normally do so to appear on a seamless mix – back to back –  as a bit of an experiment / fun with no real plan beyond the mix itself. The resulting first mix was always going to be long and not everyone’s cup of tea so I didn’t expect much of a response, but it has had a few hundred plays with no real promo and there’s been quite a lot of interest from people getting involved in a 2nd volume, so I’m about to kick that process off again.
The first volume was fairly eclectic, brilliantly mixed by all the contributors and really stands up as a great mix IMO.  I always wanted it to be an inclusive thing and an interesting ‘journey’ so my aim this time around I want to get more diverse DJs on the mix, different styles, genres, approaches, and more representative of all the folks out there spinning 45s.
Stealing the idea from desert island disks – if you could only keep 7 sevens what would they be?
Cameo – Word Up
I know it’s cheesy but it’s one of the first 45s I purchased with my own money 😛
Truth and Rights – Johnny Osborne
Just glorious
Africa – Hackney Colliery Band
Never fails to put a smile on my face
Chicken Man – Alan Hawkshaw
Pure nostalgia reasons 😉
Grandma’s Hands – Bill Withers
again, just glorious
Gimme Shelter – Merry Clayton
A cover that trumps the original IMO – from the lady that made the original what it was.
Gangsters – The Specials
I remember hearing it as a kid and thinking ‘this is amazing!’ – still love it
You can check out more mixes from Deejay Leery at his Mixcloud page
Criztoz Crizto On 01/10/2020   /   45 Day Radio Show, 45s, 7" Vinyl, Interview, Mixes, vinyl