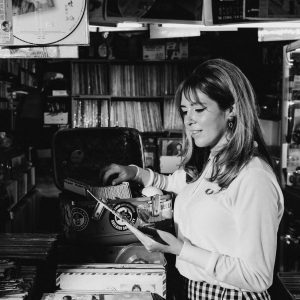 Thank you for being the first guest on the 45 Day Radio show. Can you tell us about a few of the tracks you included in your mix.

Thank you very much for the invitation! I played a mix of 60s soul jazz, RnB and northern soul records (with a twist!) from the US, UK, France and Asia. Original songs and cover versions. I dig the Hammond organ and sleazy RnB, so I really enjoy spinning and dancing to these 45s. I’m especially fond of the Mandarin version of ‘Unchain My Heart’ by June Mok – a record I’ve discovered while living in Singapore. I also played Sylvie Vartan’s sultry version of ‘Comin Home, Baby’. The Nichelle Nichols ‘Know What I Mean’ b/w ‘Why Don’t You Do Right?’ is a pretty difficult record to come by, especially the Chilean pressing like mine, so I always get a thrill playing that. Southwind Symphony’s version of ‘Coming Home’ is a monster jazz-tinged alternative to Lou Pride’s northern soul anthem! I finished off the mix with one of my favourite records – Lou Lawton’s ‘Knick Knack Patty Wack’. Just try not dance to that!
You first started collecting vinyl at age 10 when you bought your first record. What was that record and what music were you into at that time?
It was Dusty Springfield’s ‘A Girl Called Dusty’. I bought it with my pocket money from an opshop for less than $1. I‘ve always been mad about the 60s – the politics, music, fashion. I remember being drawn to Dusty’s platinum blonde bouffant, heavy eyeliner and glamorous dresses. I still am!
As a DJ your sets focus on using original vinyl 45s from the 50s, 60s and 70s and in particular femme fatales, vintage vixens and bad girl babes. What is it about these eras and artists that appeals to you?
The 60s was one of the most divisive decades of the 20th century – the civil rights movement; women’s liberation movement; the change in fashion from merely function to expression; art and architecture developing new lines and aesthetic. It was a dynamic time! For the first time in history a lot of people had a disposable income and spent it expressing, experimenting and exploring; a huge shift from the austerity of the first half of the century.
I‘m drawn to female songwriters, musicians and singers because I relate to them and their story telling. It’s a no brainer to provide a platform for female artists of any era through my radio shows. The music and media industry is still extremely male dominated and until equality is achieved we should all shine the light on women of music.
You also host two successful radio shows – Kiss Kiss Bang Bang and Girls In The Groove. In your opinion what makes for a good radio show and how do you keep the listeners coming back for more?
I’d like to think I provide good music selections and interesting patter but the most important element, in my opinion, is having passion for music. I love the records I discover, select, play. I cherish my record collection. To me, DJing and radio is the introduction of friends to more friends. There’s nothing worse than a miserable looking or sounding DJ. How are punters meant to get behind the music if the DJ can’t? You‘ve got to be in it for the right reason and love what you do!
You moved from Australia to Singapore in 2017. Did you find that the music scenes differed in any way between the two countries and how do think the scene will move forwards once lockdown restrictions are fully lifted?
Ohhhh yes! There‘s a huge difference between Australia and Singapore in both music and attitude towards music. The Singaporean government clamped down hard on live music, entertainment and the arts back in the late 60s, at a time when music culture was exploding. This had a massive impact on future generations’ attitude toward music. As a country, Singapore have focussed on becoming a mecca for finance. To which they’ve succeeded, but at a great cost. That being said, the vinyl culture in Singapore is growing. Moving forward – we’ve got to keep spinning these tiny black platters, sharing the music, welcoming diversity and keep the passion alive.
Criztoz Crizto On June 1, 2020   /   45s, 7" Vinyl, Interview, MIxcloud, Mixes