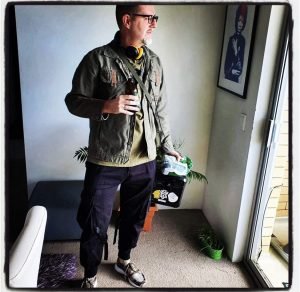 When did you first become a DJ and at that time which other DJs and artists inspired you?

I first started DJing around 1985. That’s when I first met my homie DJ Bribe (Angus) and started going to clubs in Brisbane Australia when we were 15. Australian radio at the time was cool but it wasn’t telling the full story of music. Besides some of the big worldwide hits from the Jacksons, Earth Wind and Fire or some breakthrough rap like Uprock by Rock Steady Crew and Buffalo Girls the radio hardly even scratched the surface of Funk Soul or Hip Hop – all that stuff was mostly underground in Australia. So in Brisbane at this time, we started to find more of this music in some of the clubs, and once we cottoned onto what the DJ’s were doing we wanted to explore this world more and more so started digging. We were already into breaking so would be up on the early Hip Hop and electro jams but mostly bumping cassettes in ghetto blasters. Right at this time Hip Hop was evolving rapidly and scratching and beat juggling were catching more of our attention. So next step we bought proper club turntables specifically two Technics 1200’s that we’d see DJ’s tear it up on in DMC and New Music Seminar routines we’d get on video. The mixers we were using started with Realistic then changed up to Gemini’s which were even more tailored to scratching with better cross faders and back then even rocker switches for transforming. Then we would just practice a lot jugging two copies, getting that timing down real precise, and learning the cuts and transforming from these DJ competition videos and getting inspired by some of the scratching coming out on records released around then by some of these same DJ competition champions like Jazzy Jeff and DJ Aladdin then Cash money and DJ Scratch and UK cats like CutMaster Swift and DJ Pogo. We loved some of the awesome Hip Hop DJ’s in crews too like Duece Ace Detonator Too Tuff from Tuff Crew and faster styles from Mixmaster Ice from UTFO, DJ Man on tracks like Bust This from MC Shy D and DJ Devastate from Demon Boyz and of course DJ Premier cutting up funky phrases in Gangstarr was a massive inspiration. And as much as these DJ’s inspired scratching and juggling, DJ/Producers like Primo and artists like Schoolly D, KRS ONE and QTip were inspirations for digging and sampling. I was in a crew of mostly DJ’s and we would play our favourite records and DJ live on the radio and in clubs and parties so nothing has changed really.

Thank you for your mix for the show. Can you tell us about some of the 45s and why you chose them for the mix.

Yeah, well you said play something you wouldn’t normally play. I partly met this criteria by playing some of the 45’s I’ve most recently purchased and haven’t played out or used in any mixes yet.

The records I used in this mix were bought from three different record stores that I like to support. The first was a batch of 45’s from my first online order from Dr Diggins out of Melbourne Australia. I bought some classic drum break heavy library records, cuts from the mid-seventies recently issued on 45’s. Also from the Dr I picked up some tasty re-edits of classics Hip Hop and funk joints and reissues of some drum heavy jazz and funk cuts which I sneaked onto this mix. I also snapped up some test pressings from Roy Budd 45 reissues – I always loved those groovy sound scapes recorded so well by Roy Budd with all those musicians for those UK soundtracks from the 70’s like The Black Windmill and Diamonds.

I rounded up the mix with a few fab funk finds from 1978 from Catalog records in Brisbane – Freaky Deaky by Roy Ayers and Thank You For Funking Up My Life by Donald Byrd. And in the middle somewhere a tasty grab from Butter Beats Records – Fat Time by Miles Davis with that Marcus Miller bassline and Miles trumpet snippet sampled and cut up by Digital Underground on Nuttin’ Nis Funky. There were some cuts on there from a 45 release by another fave record store out of Brisbane as well – Monster Robot Breaks – shout out Jing. I think those records blended really well together – connected by heavy drums breaks, fat basslines and jazzy soul.

You very kindly invited me to put together a 45s mix for volume 45 of your Oblivion Funk series. How and when did you start the series, what does it promote and which other DJs have been part of it?

Oblivion Funk is a fortnightly Mix series on RapTz Radio based in Paris, France. Loki from RapTz hit me up a few years ago after hearing some of my Mixcloud mixes and asked if I’d be interested in doing a show on his radio. I checked the website out and loved the whole vibe of it. The shows were fresh with DJ’s from across the world and the imagery was very appealing. I liked the spirit behind Raptz which promotes Beats Media and Culture – music and a message, so I was down. I first started doing a show called Groove Me where I did hour long mixes of plush funky disco tracks from the late 70’s early 80’s, just bangers. I loved the sounds but they weren’t getting a lot of plays so I had a chat with Loki and he suggest I change up the format. I ended up putting the Oblivion Funk theme together because I was truly concerned with the problems I was seeing in the world, particularly with climate change but also political unrest, discrimination, corruption or even just apathy towards identifying and acknowledging the problems. I realised that this was a theme that should be explored with fresh eyes when digging. It opened up the crates wider than just a focus on party music. There was an edginess to the show’s theme but there were also opportunities for playing songs of hope, freedom and passion so that the mixes have this ying and yang balance. I come from a background spinning on community radio and bringing in guest DJ’s is always a great way to keep the content fresh. There have been so many outstanding guest mixes on this series from legendary DJ’s I won’t be able to name them all unfortunately, but to give some context there are guest mixes from some foundational DJ’s in Australian Hip Hop Katch, Blaze, Ransom, Frenzie, Jigzaw and some legendary MC’s who are also producers and DJ’s like Delta and Calski and DJ/Producers like Sandro and Bacon. There are members of the Wax On Crew out of Brisbane Toby G, Get Sum, Scrillahands, Lexicon and more to come. Exceptional DJ’s like Sydney’s DJ D and Mathematics and Melbourne’s Obliveus, Mz Rizk and Ghostnotes. Many 45 Kings affiliates in here too including Mr Lob himself, and of course yourself repping 45 Day. There are mixes for this series lined up well into next year as well – we just dropped the 50th show in September. All these shows are posted on my mixcloud page – https://www.mixcloud.com/leehardwickartsound/

Lockdown has been very hard for most people and in Australia where you are based there is still currently a severe lockdown in place. How has that affected you and your creative output?

I live in Brisbane and for the most part we have had it way better than Melbourne or Sydney. We are mostly free to go about our business in a Covid free environment, but can’t always leave the state, but at this point in time that suits me just fine. If there is a lockdown, which has happened here and there, I get to work from home still so I just listen to records while I work. Can’t complain about that.

What has been the proudest moments in your career to date and what plans do you have going forwards.

The moment when I realised that the work I put into creating a Hip Hop concept album back in the early 90’s with Blunted Stylus was a cornerstone piece of the evolution of Australian Hip Hop. While I knew the joint Hempatitis was quality with many many months of effort put into the project over several years, I didn’t realise the impact it went onto have until I looked back on it later. In the moment you are just putting effort into creating some music you love, inspired by all the records I mentioned before. But that project had a lasting legacy. After that record was completed, Jigzaw Geoff Boardman who I collaborated with on Hempatitis teamed up with some other homies DJ Katch and Dave Atkins to form the Resin Dog’s. Hempatitis was the second vinyl release on Katch and Dave’s independent Hip Hop label Hydrofunk Records which has now gone on to release over 70 records in last 25 years. Hempatitis has just been reissued as a 25 year anniversary edition with a bonus 45 release with the Blunted Stylus track Grinnin While Ya Spinin’ on the A Side and a vocal version of the track later released by the Resin Dogs as Grinnin featuring the legendary Australian MC Lazy Grey on the B side. So I’m proud to have a classic OZ Hip Hop 45 in circulation and grateful to have contributed to Hip Hop DJ and sample culture out of this country. Going forward I am laying down cuts on a number of different projects. There are a lot of active MC’s and beatmakers getting busy right now so I’m happy to be involved in a number of these projects. Also keeping the live DJ shows in play with regular gigs with different focuses – like Funk Em (Just To See The Look On Their Face) just playing party funk dancefloor bangers all on vinyl, Wax On Crew is a bunch of dedicated vinyl diggers who regularly catch up in different venues and play some eclectic cuts and then there is Midday Marauders a quarterly Hip Hop jam showcasing Hip Hop DJ Skills. There is so much love out there for DJ’s with deep crate knowledge and skills, it keeps me busy and it’s a lot of fun.
DJ Fib
Play That Beat Crew
Wax On Crew
https://www.mixcloud.com/WaxOn/
Oblivion Funk RapTz Radio
Criztoz Crizto On October 1, 2021   /   45 Day Radio Show, 45s, 7" Vinyl, Interview, Latest News, Radio show, vinyl