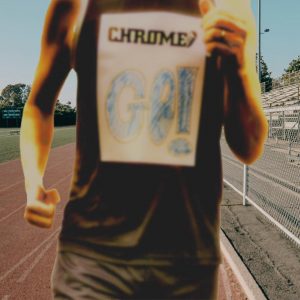 When did you first fall in love with hip hop and which artists got you into the scene?

I really fell in love with Hip Hop as soon as I found it which was around 82/83 when the ‘Breakin’ phase happened. But it was my older brother bringing home the ‘Electro 1’ compilation that really cemented it. And by the time it got to ‘Electro 4’ and I heard ‘Sucker MCs’ by RunDMC i was completely sold! That song was the catalyst for me to start writing lyrics at the young age of 9. I was later inspired by LL, Steady B, The Juice Crew, Native Tongues, Organized Konfusion, Freestyle Fellowship and The Roots.

Your new 7” single ‘Go’ has just been released. Can you tell us about it and how it has been releasing a single and accompanying videos whilst in lockdown?

It’s a track which came about from working on music with my live band. We wanted something a little more funky and stripped back, and I thought the classic ‘Fantasy’ break sounded perfect to start with. The working process was very straightforward from there. And we’re now writing and recording new material hopefully for a new LP by the end of the year under the name of ‘Chrome+’ a subtle change in the name, haha!

As for releasing this within the middle of lockdown, it’s not much different apart from the restrictions with making the videos for it. We have been on a D.I.Y. tip with that.

You present the Chrome Funk n Soul Show and also the No Half Steppin live stream show. How do the 2 shows compare?

The No Half Steppin show came about from a monthly night we have in Norwich which has been running for the best part of a decade now. The style is classic Hip Hop, Funk, Soul and Breaks so the weekly show is loosely based on that formula. But I personally tend to get stuck in to the Hip Hop a lot more! The Funk n Soul show on Future radio is a lot more organised, and approached in a professional manner. I was given a prime slot of Friday’s 6-8pm and a brief of what to play. I tend to keep the first hour all new music and then delve in to the crates for the second hour with a guest mix too. Both shows are really enjoyable, and have been keeping me sane throughout this pandemic.

Thank you for your 45 Day mix. How did you choose which tracks to feature on the mix?

Thank you for the opportunity. I just went for the first batch that I’d recently been ploughing through and went from there. I tend to freestyle it a lot even when I play out. I probably need to prepare more! Ha ha.

With social distancing here for a while how do you see the future for live Hip Hop and DJs?

Well, let’s hope that something changes soon and we can all get back to doing what we love! But I suppose the main fear is smaller pubs, bars and venues closing because they can’t financially keep going. I really hope I’m wrong. Fingers crossed that by next year we can have festivals back on the go. Hopefully that should give DJs and artists some opportunities of getting some gigs.

Thank you to 45 Day and to all of the people listening and buying my music!