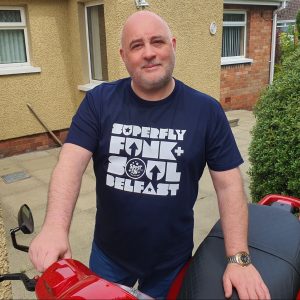 When and why did you start Superfly Funk and Soul Belfast?

I have been DJing on and off over many years in Belfast, ever since I was 16 actually, so have always had a healthy interest in the music for most of my life. Around 8 years ago, I happened to bump into an old friend and as we got chatting, we decided to look at putting a soul night on in the city. We ran a couple of these together under the banner of the Night Train and these little events gathered solid interest and were a lot of fun. I didn’t want to be lumbered with a night that just catered for the usual Northern Soul and Motown tunes, however much I love that music and decided to change the name of my club night to Superfly Funk & Soul Belfast around 7 years ago. For a while, these were low key affairs and I knew that if I wanted to ensure the longevity of these nights, I had to look at offering up something a little bit different from other club nights in Belfast. Once I decided to run with some great live acts, that was the turning point for the brand.

For those that haven’t been what does Belfast have to offer for music fans and record collectors?

Belfast is a very warm and welcoming city with a lively pub scene, especially based around the Cathedral Quarter area. There are so many new bars and restaurants now, it’s getting difficult to keep up! We are not blessed with a huge number of record stores in the city these days, I guess it’s just part of the way in which people shop, with so many choosing to make a lot of their purchases online. It is however, still worth paying the stores based in the city a visit, with places like Dragon Records (a favourite of mine), Time Slip, Voodoo Soup, Strange Victory and even Octopus’ Garden offering record buyers the chances of picking up some little treasures! There is also St. George’s Market, which has several stalls, one of which sells records on a Saturday, whilst using the time there to grab some tasty food! Belfast City Centre is not a huge place and all of these stores can easily be reached on foot.

You have had some great guests at your events and also during recent interview sessions . Can you tell us about some of the artists you got involved and why you rate them?

Yes, for sure. I have used my previous position as a presenter for Belfast Underground Radio to build some solid relationships with various artists and when I started these club nights, I used a really cool venue called The Belfast Barge, an actual boat, to bring The Allergies, Smoove & Turrell, Crowd Company and great Irish bands like Supertonic Sound Club, The Organauts and Freedom 35’s to play. The venue was a limited capacity however and in order to push on, I moved these nights to an iconic venue called the Oh Yeah Music Centre, right in the middle of the city’s Cathedral Quarter and began to build relationships with the team behind 2 major art festivals in the city each year, both of which these events now form part of. Since moving to the Oh Yeah, we have seen a return of The Allergies with Andy Cooper, Soul Grenades, The Mighty Mocambos from Hamburg,  Apollo Negri’s Link Quartet from Milan, Men of North Country from Tel Aviv, a return of Smoove & Turrell, plus 2 sell out shows in both Dublin and Belfast for the legendary James Taylor Quartet.
In reference to my recent run of interviews, I wanted to chat to artists that I feel have a real relevance to today’s music scene and who I also have huge respect for as artists. To date, I have chatted to Billy Sullivan of The Spitfires, Hannah Williams, Nick Corbin, Malcolm Strachan of The Haggis Horns and Crowd Company’s Rob Fleming. Next up will be Adam Gibbons (Lack of Afro), Nigel Evans (Flevans) and Emrys Baird of the Soul Immigrants.

You have recently started presenting your own show on Brooklyn Radio. What do you have planned for the show and what tips do you have for anyone wanting to get into presenting their own radio show?

For the show onThe Face Radio in Brooklyn, it’ll be a smooth transition from my long running show that aired on Belfast Underground for close to 5 years. My main focus has been and will be a continuation of being a champion for new music, whilst occasionally digging into my collection for some classic artists along the way. Today’s scene is incredible and for those who have regularly listened to my shows and mixes, those people will know to expect to hear artists such as Crowd Company, The Getup, Stone Foundation, Hannah Williams & The Affirmations, Flevans, The Allergies and Smoove & Turrell. I’ll also play some of my favourite artists such as Curtis Mayfield, Stevie Wonder and Donny Hathaway plus I’ll be looking to add an Irish flavour to the show by featuring local talent such as The Gold Tips, Manukahunney Blue, The Organauts, Freedom 35’s and Dublin’s Supertonic Sound Club.
In reference to anyone wanting to get into radio, I’d say to firstly work hard at building a profile, use social media as a great tool and make an effort to get on well with like minded people. Know what you want from your show and have a clearly defined plan, which you’ll need to be prepared to talk about to stations once you start to contact them. You’ll need to be able to describe ways in which you can bring something fresh to the station, how you will engage and interact with your listeners etc. Plan each show ahead. Don’t be one of those DJ’s who just turn up with a bag of records. My own shows are planned to run for the exact time allowed, in an order which flows nicely for the listener to enjoy. Paying attention to detail is the difference between a good presenter and a poor one. Make the chat relative as well. Don’t talk for the sake of talking. Try to engage the listener at all times.

With the world only just starting to come out of lockdown how have you dealt with the move to more online events and how do you see live music/DJ events proceeding in the future?

In lockdown, I felt it was crucial not to slow down the growing of my brand, especially after the huge success of both James Taylor Quartet events. In a short time, we’ve went from putting 90 people on a boat, to selling out 500 capacity venues and I wasn’t prepared to just sit back while the world had ground to a halt. To be honest, that’s just not in my nature.
For me, this has been a great time to really focus on the things that I simply didn’t have the time to devote to. I wanted to learn some new skills, so I invested in the right equipment to allow me to be able to broadcast from home with great quality audio, meaning that I was able to join the new station, plus I decided to run a 12 hour funk & soul marathon event, bringing together a series of DJ’s from around the world to perform, alongside some well respected artists from today’s scene, namely Nick Corbin, Noel McKoy, Lorraine Clarke-McGhie, Emrys Bird of the Soul Immigrants, Stone Foundation front man Neil Jones, and The Allergies to help raise much needed funds for the NHS. With the help of Kurtis Powers and my good friends Norm Crothers,and Ronan Cunningham, the technical side of things were all sorted, meaning that the event ran smoothly throughout the day, despite the challenges we faced with different time zones etc.
I think that with so many different DJ’s and artists choosing to go live now, it’s so important to work hard on the video and in particular the audio quality. Nothing makes me switch off faster than seeing someone go live through their phone, it’s lazy and such poor quality. A few quid spent on the right equipment makes such a difference.
Regarding the future, I think this is the world in which we have just got to accept, until there comes a time when bars and clubs can open properly again. let’s not lose sight of the power of music though and remember, if you’re gonna do it, do it properly.