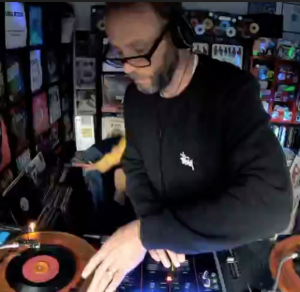 Thanks for your live stream on 45 Day. Can you tell us about some of the tunes you included and about the killer brass version of Hey Ya?

Glad you enjoyed the mix! Those selections are some of my sureshots from playing 7″s in the clubs for the last 25 years. My style is party rockin and heart tugging soul, funk, latin, boogie and disco that is heavy on the beats and hopefully that mix reflected that. That version of Hey Ya is by a French group called Quiche Lorraine. I picked that up when we ran Boombox Distribution in the early 2000s. We got a few copies of that off our French distributor and they literally sold out in minutes, never to be seen again!
Why do you think that 45s are still so popular in this age of digital downloads and streaming?
I think 45s are a trend that started before downloads and streaming. We started collecting 7″s back in the early 90’s when we were digging out the funk breaks in acid jazz era. The 7″s were cheaper than the LPs and better for playing out as they were louder pressings. Diggers such as Jazzman, DJ Shadow, Egon et al were the kings of sevens back then and the whole thing hit a new level when Shadow and Cut Chemist released the first Brainfreeze mix. At the same time Desco and Daptone started putting out new 7″s and thats also when we released the Deadly Sevens Series on Breakin Bread. Fast forward twenty years and more and more people have realised they are the most portable format for playing records and they look uber cool! I do think its got a bit ridiculous now tho when perfectly good records on 12″ are being re-released on 7″. I’m now ready for the 12″ craze!!
You have been live video streaming from the disco shed for quite a while now. What tips do you have for DJs who are embracing it for the first time due to lockdown.
Get a good camera (we use go pro) and don’t do it from your phone!! Also, don’t just rely on Facebook and Youtube who have ridiculous copyright rules meaning we cant play good records despite the fact we’re not making money
Breakin Bread runs a record label, club night and radio show. When did you first start Breakin Bread and how has it evolved over the years?
The Breakin Bread club nights started in 1998 in a pub in Brixton. This was at the time of Jurassic 5, Desco, Daptone etc and we were just lucky to be in the right place at the right time. We were doing an all elements hip hop club but playing funk, soul, breaks, latin, disco etc. Everything we were collecting at the time. We were probably the first club in the UK to combine all those styles in the late 90s. Within months we had queues round the block and started putting out records. The records took us to another level and meant we got bookings to DJ all over the UK and Europe. Nowadays many clubs combine all those styles of music and I’m proud to think we were at the forefront of that. We’re older now and have kids so we’ve stopped putting out records (they take too much time and effort) and we concentrate on DJing and podcasts. The mixcloud thing has gone crazy, its really fulfilling to have over 21,000 followers and we’re very grateful for the support
What do you think the future holds for the DJ scene once lockdown is over?
God knows! I hope we get to clubs in 2020 but I fear we may not. I think the online community has been great in lockdown and its brought together alot of people. Lets hope we all continue to collaborate like this in the future
Criztoz Crizto On 05/05/2020   /   2020 Line Up, Interview, Latest News, Live Events, Live Stream