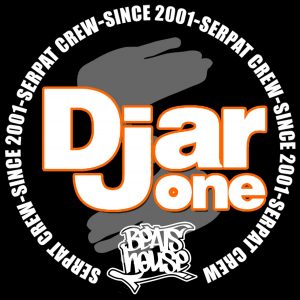 DJAR ONE is a producer, DJ and MC from Le Havre, France. Member of the Serpat Crew and Pitchcaps Posse, he is the co-founder of BEATS HOUSE RECORDS. He has worked with many artists around the world, like Sadat X, El da Sensei, Gérard Baste (Svinkels), Too Many T’s, Whirlwind D, Carpetface… and composed soundtracks for RedBull and Canal+, He has released sold out 45 vinyls, featuring great international MCs (Andy Cooper, Napoleon Da Legend, Chrome, Dragon Fli Empire, Phill Most Chill,…) on his own label, Behind the sampler, the turntables or the mic, he always deliver good grooves to keep Hip-hop headz and party people on the move !!! CAN’T STOP WON’T STOP !!!