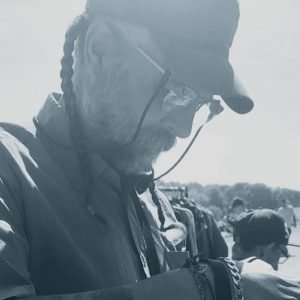 Previously known by many other names around several scenes but now after 30 years of DJing I have found a happiness in being known as 45 Digger, as that is after my wife and (grown) kids my love. That love covers many genres I collect and play, though it is a soul heavy collection be it rare or cheap if its good it gets a spin.

Always the digging on record hunts is for 7” 45rpm singles, and the odd 78rpm 10” if they come up, it is what I have also come to love most as a format to collect and DJ with, maybe even sell or as has been known by fellow DJs, give away.

Over those many years Pirate radio, Web radio, bars clubs, festivals & several strip clubs have experienced my sounds. Also at times a supplier of sounds to other DJ’s on mainstream FM Radio or various soul scenes, owned an indie soul record label, built by hand a full reggae sound system with the big fat scoop speakers and everything expected and took that system around the UK for several years.

Getting MS may have slowed me down a lot but it has not stopped me.