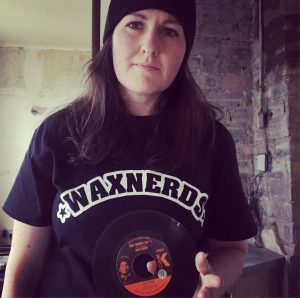 When did you first get into collecting 45s and what is it about the format that you love?

DJ culture has always fascinated me, ever since seeing my older cousin’s set up back in the 1980s.  When I was at university, I bought my first set of decks with one of my student loan payments.  Around that time I was going to clubs around Glasgow every weekend and a regular at the Art School which at the time had some excellent club nights such as Hi Karate, My Machines, Divine and Freakmoves.  Hearing the quality of music played at these events week in week out had a real influence on what I listened to. I started off buying lots of 90s hip hop 12s and LPs, which is what I was most interested in at that point – Gangstarr, Stetsasonic, ATCQ and the like. Over time, I got involved with playing local bars and outdoor parties, and my buying habits diversified as I played to different crowds of people.  My love for 45s started around 2010, when I started to get into collecting northern soul and deep funk.  I love the portability of the 45, it’s easy to bring lots of them with you when you are playing out and have a greater choice of music to work with.

Can you tell us about some of the tracks you have featured in your mix and why?

One of my current 45 obsessions is dancehall, and in particular hip hop remixes of dancehall.  In terms of BPM, they work really well with hip hop records and it changes things up a little bit.  Capleton and Beenie Man are big favourites of mine. A friend put me onto the Toni Braxton song quite recently. I’m wasn’t massively into modern R’n’B music when it was really big in the clubs 20 or so years ago. but I’m starting to appreciate it more now.  Everyone’s musical taste evolves over time, so I constantly relisten to music that I’ve previously dismissed.

You are based in the amazing city of Glasgow.  When not in lockdown where are the best venues and record shops to check out in the city?

I definitely recommend visiting Otherside, which is based in the south side of Glasgow. It’s a curios shop which sells records alongside books and antiques. They have a nice little selection of quality soul and funk 7s alongside hiphop and dance 12s.  In the city centre I tend to visit Missing Records every couple of weeks – I’ve picked up some nice jukebox and dance music 7s from there over the years.  I recommend Mixed Up records in Otago Lane for the best selection of used vinyl and Monorail Music at Kings Court for newer releases.

You collaborated with DJ Pooky on a Waxnerds 45 release in 2018 “Faith Like This”.  Can you tell us the process of putting that 45 out and do you have plans for more releases?

The main attraction of putting out my own 45 release on Waxnerds was the opportunity to remix and put a song that I really love onto the 7” format. It was my first time doing so, and I was really grateful to have such talented people on hand to help with the project. DJ Mark-One, who runs the label, is instrumental in its creative output, and gave some really constructive criticism along the way. I sent him 4 or 5 different ideas over several months until we landed on the Faith Evans remix. For the first iteration of the remix, I had chopped up the Chic Cheer vocals for the backing track, but it wasn’t sounding quite right.  Mark brought Pooky onboard, a renowned DJ and producer, who had already put out a couple of released on the Waxnerds lable, and he unlocked the whole thing by changing up the backing track.  I would like to do another 7” hip hop release at some point on the Waxnerds label!

You have been busy live streaming over the past few months including as part of the 45 Queens event.  How do you find live streaming and what tips do you have for anyone wanting to get into it?

I started live streaming back in July when Waxnerds set up an all day dj event on Twitch.  Since then, it has become a weekly occurrence on a Thursday evening ,with lots of the crew members getting involved which is great to see. I loved taking part in the 45 Queens event, it was a privilege to participate in such a great showcase of female DJs, from the USA to Europe to Australia.  I really enjoy live streaming, I think the audience interaction takes it to another level, and I also watch other DJ streams on a regular basis as well as broadcasting. It’s a fantastic platform for hearing new music and chatting to like minded people. I’m not a natural on the microphone but I think that is the case for a lot of bar or club DJs who perhaps haven’t needed to use one until now.  I would say get familiar with the platform before you start broadcasting, watch a few streams and learn about how the audience engages with the streamer and the raid process. Getting the set up right for broadcasting can seem challenging – keep it simple to begin with – you can get going with just a smartphone in the first instance.  It’s a lot of fun and becomes quite addictive!