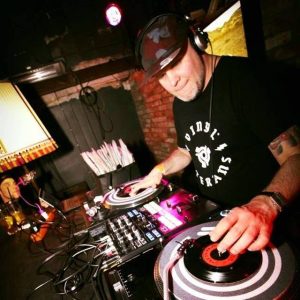 You have done a great funk mix for 45 Day. Can you tell us about some of the tracks that made the cut?

It’s a one take recorded selection of German funk & soul cuts, some og, some covers. Some pretty rare like Kati Kovac “Sehnsucht” or Tandem “Ein Typ Wie Du”, some well known like “Pussy Footer” by the late Jackie Robinson or Can’s “Vitamin C”. Did the very first mixtape with german only songs, called Funkvergnügen, in 2003 with my fellow mate Katmando together. Every country got his hidden gems, so we’ve thought, why not, let’s do it.

With most of the world currently in lockdown DJs have found themselves streaming online. How have you found that transition and what are the pros and cons?

It’s a new world to all of us out there and right now there’s a gazillion DJs streaming to the world right now. One point, I think, is important: deliver proper quality via direct audio, a HD webcam and broadcasting software like OBS. Nobody wants to see a blurry DJ’s back who’s sounding like a private garage rave, no matter how good his selection is. It was a bit tough in the beginning to get all the technical specs together, but it was worth it. I also think that, even when the lockdowns are over, a few formats will stay, like the IG splitscreen interviews for example.

You are starting a regular Dusty Donuts live stream shortly. Who do you have joining you on the streams?

Well, we’re at the very beginning with this format now. The idea is to host a talk with each one of the Dusty Donuts Dj Squad and a international guest. As we go direct audio, to have the best quality possible, it’s a bit tricky, as the guests need the same technical specs (which relies mainly on one special cable). Right now we have to figure out who’s down to join us with that. So it’s a bit too early for announcements.

Releases from your label Dusty Donuts are craved by 45s DJs. What is it about them that makes them stand out and when can we expect more releases?

There’s coming more for sure, it just slowed down due to the crisis, but the next one will go to the pressing plant in 1-2 weeks. What makes them standout is our unique formula, invented by Jim Sharp. Taking a Hip Hop classic (mostly), based on a sample, rebuilding the beat and let the OG song sampled going through the whole track. Not every combination fits or works, so we had to try out a lot of things and got to a special mindset, about thinking for our reworks, before we’re even starting producing them. Plus we have a very good mixdown, perfect vinyl mastering and direct connection to the pressing plant. Sound matters!

Once lockdown restrictions are lifted how do you feel the DJ world will change?

It changed already and will continue to do so. Think about how long it will takes, that international travel will be back again and for what kind of rates? So, there will be a good strenghtening for the local scenes due to this alone, as the people starving to enter bars & clubs again. Clubs will restart with lower capacity, this will be either more exclusive events or simply underground partys again. Can’t say how long this all will take to get back to “normal”, but in between, everything is pretty much different now.