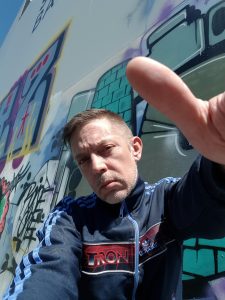 How did you first get into music, who are your main musical influences and can you tell us about your favourite producers and labels?

At the age of 5, my dad bought me a portable turntable and two Beatles records…that’s how it all started.

The first bands i expired for myself a little later were Queen, Iron Maiden and The Pogues.

I started doing music by myself at the age of 14 by mixing Italo Disco and Acid House records. But bands like the Beastie Boys and Public Enemy paved my way to Rap music and to the Hip Hop beats. By getting in touch with Rap music, the interest in it’s roots was growing more and more. So that’s how i fell deeply in love with black music and with sampling from jazz, funk and soul records.

My favorite producers of today are:

My favorite labels of today are:

Can you tell us about your first band, your label, and your setup for producing?

In 1991, i formed the band P-27, with which i produced and released the track “Murder By Dialect” (feat. Black Tiger). This song is still considered the first rap song in swiss-german dialect been released. The band consisted for many years, released three albums and played more than 120 concerts with live musicians all around switzerland. In this band, i had the role of a lead rapper, scratching dj and beat producer.

With the project Chapter12 around saxophonist Andy Scherrer, i was able to express my love for jazz with rap vocals and experimental scratching. The drumbeat production for the song “Deshalb bin ich hier” by Thomas D. (Die Fantastischen 4) was an enriching experience too.

For many years, i focused on the production of rap instrumentals/remixes and did soundtracks for advertising and movies. I also produced the music and mixed the albums of several swiss based rappers and did lots of scratch part features.

In 2017 i founded the label “Burning Sole Records” together with Emanuel Westdjik, on which i released 11 singles and 3 LP’s so far. All of my last 7inches made it to the top ten of the UK Juno Records funk bestseller charts.
The label that started as a kind of fun-thing/experiment became more and more serious.

with already 27 vinyl single releases of new songs by bands from Germany, U.K., Russia and Switzerland. And this story is not over yet. Lot of new funky stuff is in the pipeline and will be released.

I work almost exclusively by searching, finding and processing samples, which i take out from funk, soul, jazz, blues or other (to me) good sounding records. Since day one i’m working with Cubase.

Because i early learned to create a most possible result with less equipment, my „studio“ today is still ridiculously minimal and simple.

I use a mac-laptop, interface, microphone, headphones, monitors, usb keyboard, mouse and of course…a turntable. I don’t need more than that to make my oldschool-based music.

The rest is trade secret 😉

All DJ Tron productions so far are one-man productions on which i am responsible for the entire music, mix and the cover layouts.

How long have you been collecting records and what is your view of the popularity of 45s increasing?

I am collecting vinyl records since i was about 10 years old. The kick-off and first self-bought record was „Vulture Culture“ by Alan Parsons Project.

Privately i am collecting only LP’s and 12” Maxis. I was always fascinated by the suspense, the artwork and the search for „non-hits“ on longplayers.

But i am happy about the „comeback“ of the 45 single too. And about the fact that so many Funk, Soul , Hip Hop and Reggae DJ’s playing vinyl again today in the clubs and at home.

I am thankful to have the possibility to release my music on 7” singles because it’s finally landing on the decks of music lovers, beat nerds, wax junkies, funk brothers and soul sisters…what could I wish for better!

The format is not that important to me…as long as my music is on vinyl!

What tips and advice do you have for anyone wanting to produce their own music and get it released?

To me, it was always important not to forget what it’s about. The pleasure of making music with the goal to entertain, please or tickle ears.

Work hard to find a style that is unique and that is you! Work hard to get better in production (even if you will be „Looking for the perfect beat“ forever)! Do not compare too much to others! And when comparing, do it to learn from the best.

I see music as my way to communicate and to be a small part of other people’s life. I always feel inner satisfaction when i see funky people dance, cheer, clap or sing to my music