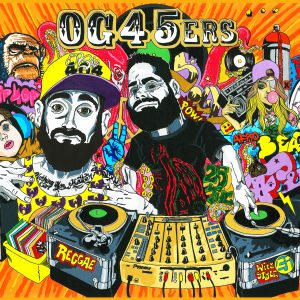 What is 45 Day? Well in brief it is 52 Mixes, a special 2 hour radio show, and a live 45 minute stream. Of course it is much more than that.

Towards the end of 2019, back before the world had really heard of Coronavirus, I came up with the idea of 45 Day. A day where DJ’s around the world would celebrate, in my opinion anyway,  the greatest musical format out there – the 7″ 45rpm vinyl record. The initial plan was for a series of live gigs across the globe. Well it didn’t quite work out that way…

Instead people entered lockdown. DJ’s gigs and income disappeared overnight and they had to adapt to the live streaming world that was thrust upon them.

I sent out invites to vinyl DJ’s I knew, DJ’s I didn’t know but highly respected and in groups like 45 Live and The Forty Five Kings. The response I got totally blew me away. What I have seen is a great sense of community, friendship and wanting to get involved. This is coupled with a total lack of ego and just a pure love of music and the format.

When I first came up with the idea I set the aim of getting 45 DJ’s involved. I thought that if I could get 20 or so involved that would be a good effort for the first year and it could grow from there. It has exceeded my expectations with so many great people getting involved and a wide range of mixes. At the time of writing there is 48mixes  (plus a 2 hour radio show) submitted. The mixes range from bedroom DJs, gigging DJ’s, high profile DJs, producers and label owners.

The icing on the cake is the 45 Live radio show recorded specially for 45 Day. Presented by the legendary Greg Belson it features an exclusive mix of the 45 Live catalogue by Moneyshot from the Allergies.

It may sound like a cliche but the mixes really are all killer and no filler. The format lends itself to quick mixing and having to be very selective about which tracks to include in your set. Especially when you only have 45 minutes to showcase your musical tastes and style. This makes DJing with 45s so much fun and this definitely comes across in all of the mixes.

We have some crazy scratching (much harder to do on 45s than 12″s), doubles being rocked, genre hopping, DJs representing their own 45s releases and some amazing selectors. I have yet to hear the same track twice in the mixes which shows the breadth of music and genres being represented. Well that was true until my good friend and amazing turntablisit The Hip Assasin dropped in late with his mix. It features a short section of Silver Bullet’s “20 Seconds to Comply” which also features on my mix.

One final point to make. This is a man’s world as James Brown sings on one of the tracks in my mix. All the submissions in 2020 have been from men. I guess this may have something to do with the subject matter but where’s the ladies at? It would be great to get some female DJ’s involved next year.

Heres to 45 Day 2021 when hopefully we can once again party and dance next to each other to a soundtrack of great music on 45s. Thanks for tuning in.

45 Day would not have been possible without the help of the following:

Graeme Willis – For encouraging me to think bigger than just a straightforward mixcloud page, for building me a website and teaching me how to use wordpress in a week to produce this. I definitely owe you a few beers when we can get to the pub again.

Adrian Bradbury (Big 404) – My Co-DJ in the Original Forty Fivers. We had been DJ’ing for a couple of years together with my main man Toby Kenobi as the Jellyfunk Allstars when Adrian suggested doing a night playing just 45s. He re-invigorated my love of the format and set me down this path from which I haven’t looked back. Sadly due to lockdown we were unable to hook up to record a mix together so I’ve represented with my solo mix. Can’t wait to DJ with you again man.

Rob Steer (Mr Lob) – He runs the brilliant Forty Five Kings Facebook group into which I was immediately welcomed into and made to feel part of the scene. I originally ran the idea of 45 Day past him to see what he thought. With his advice and input I decided to go for it and launch the event. He has helped share the event far and wide and a large number of the members of his group got involved and submitted mixes. Check out his mix for 45 day and more on hismixcloud page.

ScottieboyUK – For the use of his picture of his music room I’ve used on the front page of the site. We probably all have similar stacks of wax in our rooms. Check out his mix for 45 day and more on hismixcloud page.

A big thank you to all of the DJ’s for their mixes. It is totally down to you and your love of 45s that has made this event happen.

Thank you to all the bars, clubs, restaurants, galleries, festivals and other venues across the world that let DJ’s like myself play our prized 45s and spread our total passion for music to others.

Last and by no means least thanks to my amazing wife Claire and daughter Zea for their total love and support. Zea loves listening to my mixes and introduces my 45 Day. They allow me to indulge my love of 45s, share my passion for music, and let me disappear  into my man cave to get lost in music for hours at a time. I love you both more than you will ever know.