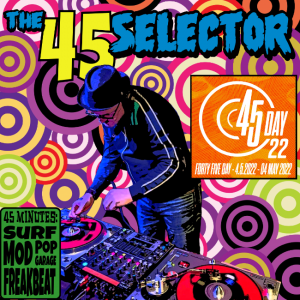 Jason, The 45 Selector, hails from Hamilton, Ontario, Canada. He has been collecting records since he was a teenager in the 80s and spinning strictly 45’s since the early 2000’s. He hosts The 45 Selector Radio Show every 2 weeks on Barrelhouse Radio where he will take you on a 1 hour trip through his vast and varied 45 collection. He also shares a bi-monthly party called Ram-Jam with friend and fellow DJ Boss Chops. They play Reggae & Rare Soul exclusively on original pressings. This mix is a total departure from that night, consisting of 60s Surf, Mod, Garage, Pop and Freakbeat.