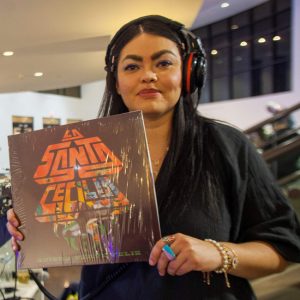 Rodriga Rockmore is a fronteriza, Chicana, and Mexican-American vinyl Dj on the border of El Paso, Texas, USA and Cd. Juarez, Chihuahua, Mexico. She has been a vinyl music selector since 2004, playing music that celebrates border life in both English and Spanish, as well as in Spanglish, a colloquial language that is a mixture of English and Spanish. She has conducted workshops where she introduces a wide variety of audiences to music in a vinyl format, its history, techniques, various genres, how to properly care for vinyls, and allows the audience to practice mixing records.

She has actively played shows in both sides of the border of El Paso, Texas, USA and Ciudad Juárez, Chihuahua, Mexico. Rodriga enjoys playing a variety of genres from psychedelic, garage, cumbia, 90s, early techno and reggaetón. A main focus on her career as a Dj has been to celebrate women artists, and has an extensive collection of music by women, which she plays during her performances. She enjoys mixing music in live events and participating in online streams as well. You can follow her on Instagram, twitch and mixcloud under the name Rodriga Rockmore.  Rodriga is also the founder and member of the collective Adelitas Fronterizas Vinyl Club, a collective of women and non binary people, on the border region of Cd. Juarez, Chihuahua, Mexico and El Paso, Texas, USA.