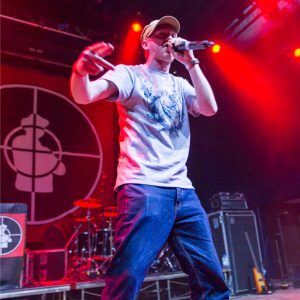 Chrome has been rhyming, cutting, breaking and generally living and breathing HipHop since the late 80’s. Whilst always experimenting with new styles, Chrome has a whole lot of substance to back him up. In previous incarnations, Chrome (alongside UK HipHop outfit ‘DefTex’ and his rhyme partner ‘Illinspired’ and also a solo artist) has played support for Public Enemy, De La Soul, Grandmaster Flash, Craig Charles, Huey Morgan, the list goes on! Chrome has toured Europe and played at festivals including Glastonbury, Latitude, Shambala and more. Chrome is also behind the successful weekly‘Funk and Soul radio show’ on Future radio. He’s renowned for rocking crowds as a solo MC or alongside his band Chrome+. His party style sets as a DJ mixing up Funk, HipHop, Soul and more add confirmation of his ability as an artist to deliver.