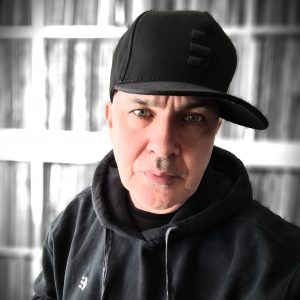 I first met you at a gig at the Imperial pub in Hastings many years ago and was blown away by your skills. For those that don’t know you can you tell  us a little about how you became a dj and your career?

I never set out to be involved in the music industry, it just happened. Ever since seeing Buffalo Gals on TV back in 1982, I was plunged into the world of Hip Hop head first & never looked back. It’s a long story, my personal road, but also a common one in the UK for all people of my age or having experienced the influx of Hip Hop into the country. First I was a breaker and also into graffiti, I would hear records with bits of scratching never even contemplating attempting it. Being the age I was and down to sheer lack of equipment, I used to make pause button mix tapes on my dad’s old hi fi. I like to think that was my first (unintentional) introduction into sampling. Like a lot of like-minded people who were brought up on radio shows or pre-internet, they have that same story in common, funnily enough if you ask most scratch DJ’s today they will say the same thing. This seems to just have been the natural route. DJ’s like Cash Money, Jazzy Jeff, DST & Coldcut were very big early inspirations. I’m 100% self-taught, and was a bedroom DJ before anything. I had seen a friend use a 7″ record of Just Buggin by Whistle. He had modified a stacking record player to use the whole thing like a turntable & mixer in one, simply by using masking tape to half the size of the up position volume faders. So one day I walked into his house, and was instantly in awe. He was sitting cross legged scratching the record & that’s the first time I had ever saw anyone do any cuts in person. “That’s what I want to do” I thought, then eventually got myself some turntables and a mixer & never looked back.

Back in the day you were also part of Monkey Mafia which I still absolutely love to this day. This included Douge Reuben who incidentally was also at the Hastings gig. How did you get involved with Jon Carter as part of the band and can you share any stories with us about that time?

The first DJ gig I ever had in front of any crowd South of the border was in a club called the Hub in Bath. Jon & I were there supporting for the Propellerheads first ever live show.

Prior to that, I was already noted as one of the best scratch DJ’s in certain circles of U.K. Underground Hip Hop but I hadn’t played out for people to actually dance to the music, only as performance with scratching in hardcore Hip Hop groups like II Tone Committee and Killa Instinct. I made a demo tape which had unbelievably been noticed by a record label who had actually heard the track playing in the background whilst in the phone to a Glasgow record shop (Rub A Dub). They showed immediate interest & asked me to record some more!

I thought that it was a piss take to be honest, but it turned out to be real. Please remember that this is all pre-mobile, pre-internet, so I was just talking to some bloke on the other end of a phone in a record shop. Turned out it was Richard Norris who was starting a record label. All out of a phone call from a cassette tape playing in a record shop that I was playing to a friend on the shop system, I made my way into the music industry totally unplanned. “Always Remain Hardcore” an E.P. Consisting of three tracks, was the result. I was there at the Hub club night to promote this release and more importantly to represent the launch of the new label “X Records” the Propellerheads were planned next to be releasing music with the label, so it was a big promotion night, even the Clash were there. I was talking with them backstage and never even realised it, nice guys and really down to earth. Jon asked me after my set being impressed with my cutting skills whether or not I’d be interested in meeting him in London and that he was planning to create a live group to perform Hip Hop, Dub, Reggae stuff, later labelled by the press as “Big Beat”. That group turned out to be the incredible Monkey mafia. I met Doug’e Reuben at the Blue Rooms studio in London (I think that was the name of the place) we had an instant ease and respect with one another. I remember we went straight into a track that Jon played that day, Douge’s lyrics “Every Day Is A Fishing Day” I can still hear in my head, an amazing vocalist & one of the best lyricists and front men I’ve ever seen perform live in a band. Never meeting each other prior or any of the other original band members, the main foundations for that group were formed that very day. The rest is history. We went on to perform live as a full band & smashed the place to bits!

I’ve kept busy by doing production, creating a four part cut n paste at the start of the first lockdown and of course producing the Sugarcubes/ DOOM project. Also forthcoming this next couple of months, is a 45 vinyl-only release tilted “Rebel Base” featuring the incredible “Phill Most Chill” on vocals. There will be two different cover variants of this and I can’t wait for people to both hear these tracks and see these covers. These will be available via www.krashslaughta.bigcartel.com soon! We are now into the middle of 2021 at the time of writing this, I lost a DJ partner & colleague  Andy Taylor who took his own life, I lost my dad out of the fact that he was separated from my reach and the industry lost the magnificent DOOM. What is going to happen is going to happen sure but my family are the most important thing to me. I’m also a carer for my mother, so there a lot of other things that keep me very busy but music is my personal way of medication or relief from the world today. I make time for it, even if it’s just to have a quick scratch on the decks. Also making mixes helps or providing free mixes to people is important, we have to support each other and we have as a scene. Radio shows like “Cold Krush” ran by DJ Specifik & Dudley  (Whirlwind D) or Smoove & Turrells show “The Northern Coal Experience” have been a lifesaver and I salute those guys, please search them out if you haven’t already. Let’s just support each other, like we are doing, like you guys at 45 Day and we will get through hard times together. I see the future as unwritten and as far as the music business of the past, it’s dead and has been for a long time. It’s up to us where we take it and the people who support us. I’m not going to go down the political route, but…No one else is supporting us. I think there will be a lot more networking of artists online and a lot more people working together, collaborating in music online, for the fact, at the moment in what’s going on with C19 what else is there for it, but that as musician’s, DJ’s, artists, designers of any kind. Hopefully there will a return to nightlife in the UK soon as we are always at the forefront of groundbreaking music. As for the rest of the world, we need to make moves to help them, I can see music benefiting this to good cause, perhaps one day a massive music. Wouldn’t that be something. Even if it’s online to create aid.

Big thanks for asking me to be part of the 45 Day event.