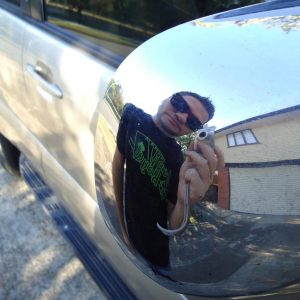 When and how did you first get into DJing and in particular 45s?

I finally bought my 1200’s in 1998. Before then I had belt drives, and before that a 3 in 1 unit that let me record onto tape with both the phono and cd inputs at the same time. So I was messing around with this dodgy 3 in 1 system from about 94-96 making pause tapes and scratching spoken word bits over instrumentals etc. Then I got some cheap belt drives for a couple years, then finally the 1200s. I started collecting records around 1987. RUN DMC “It’s tricky” was the first record I bought in grade 7, so l was probably 12 years old. I was collecting vinyl all through the 90s even though I didn’t have great equipment. I’d always had 45s in my collection but it wasn’t till about ten years ago on a visit back to Melbourne I found all these 45’s for sale at a place called “The Searchers” (Melbourne DJs will know it) – I bought basically a whole collection from this 80’s DJ and all the 7 inch singles were $4 each. That started me collecting them more seriously.

How did you then progress into producing and how would you describe your style?

I released my first original music in 2001 with my old primary school buddy Ben Eltham. We started an instrumental jazzy funky project called Briztronix. Like a ninja tunes homage is how I would describe the sound. That taught me the ropes on how to make loops and layer things – so I guess he started it all for me on his dad’s computer back then.  We’ve released an EP and 3 full LPs together since then and just got our last LP pressed on wax this year which is always a good feeling. https://briztronix.bandcamp.com/ As a solo producer –  I usually use breakbeats and loops, maybe a few 808 kicks in there to fatten it up a bit, and turntables. It’s almost 100 per cent sample based. I had a lightbulb moment in 2015 and after nearly ten years away from producing I released the run dmc / beastie boys megamix  RUN BST. That mix is an 8 minute mashup of nearly 200 samples and took about 6 months to execute and was extremely well received. I am leaning more towards megamix/ remix and edit production than live DJing to get my kicks at present. The Mantronix megamix on their 1985 self titled LP and the Steinski megamixes, also Mr Mixxx from 2 live crew with his album megamixes have been a massive influence to say the least. I love the concept of the DJ as the final orchestrator, always getting that last mix in, even after things have been released.

Your Back in Hell megamix 45 pits Run DMC vs AC/DC. Can you tell us about the process in creating this project?

That was something I’d been thinking about for a while before it came about. I really wanted to refine the megamix concept from using an artists whole catalogue to just using 1 album from each artist. That mix only has samples from AC/DC Back in Black and RUN DMC Raising Hell – no other parts of either artists catalogue, which made it challenging but really made it rewarding when i saw all these parallels between the two albums and started to exploit them (similar words, keys, and tempos).  It was never meant to be a 45. The megamix is intended as a 7 minute experience and I would encourage anyone to go to my bandcamp and get the full version if you haven’t heard it. I was getting asked by DJs to release my sure shot / Aretha Franklin remix a couple of years ago, so I just cut the megamix down to 3 minutes and made it the A side and put the sure shot / Aretha remix on the flip. I’m so proud of that as a debut 45 release. I am about to receive another 150 copies from the manufacturer this week. I’ve now sold 700 copies independently from my studio, in Brisbane, and shipped them all over the world. I’ve got distro channels in the UK, Germany, Japan and USA on the strength of this release – so I’m just topping up these suppliers every couple months now and selling and posting them physically through my bandcamp page. I get very excited seeing and hearing DJs around the world playing my vinyl and messaging me to say whats up. Thanks to anyone reading who has ever supported my releases, seriously much love.

The follow up is your latest release is Beastie Floyd. Why do these artists work so well together and can you tell us about this ambitious project?

Pink Floyd was my brothers favourite band when i grew up and mine was Beastie Boys and RUN DMC. We always hated each others music, but fast forward 30 plus years and I’m down with anything that sounds nice and less judgemental about music now. I know the whole Floyd catalogue and it was a treat to do this mix. There are some really nice melodic soundscapes in Pink Floyd, which made creating tasty loops quite easy. This time around I used only acapella vocals so it was easy to layer these. This mix has a more polished smooth kinda sound cause a lot of Floyd sounds like that. I made this whole thing in the Covid-19 lock down, and I was a bit bummed about everything and was leaning toward some darker music at that moment. This is the first ever entire remix album that has been released as a megamix album to my knowledge. The 12″ vinyl is in press at the moment, and consists of two ten minute sides megamixed from 7 individual remixes I made using just Beasties & Pink Floyd. Its a strictly promo 150 copy only release. Beastie Boys have a history of sampling Pink Floyd and actually own a lot of their old stage gear – check the Gratitude film clip for more on this.

Which artists or DJs would you recommend we check out and what were the last 3 45s you bought?

My favourite album in the last ten years is Fabreeze Brothers by Phil Most Chill and Paul Nice – it just recreates the lost era of pure hip hop so well, breaks and rhymes and DJ – its brilliant. I think we should all continue supporting each others releases and mixes as much as possible. There are some great mixes going down in the 45 Kings group. I just bought a stack from Dr Diggns yesterday, The top 3 are Bootsy Collins, there is some George Clinton and Sly stone in there too. I love classic Funk and rap.

You can pick up DJ Bacon’s releases from his Bandcamp page.